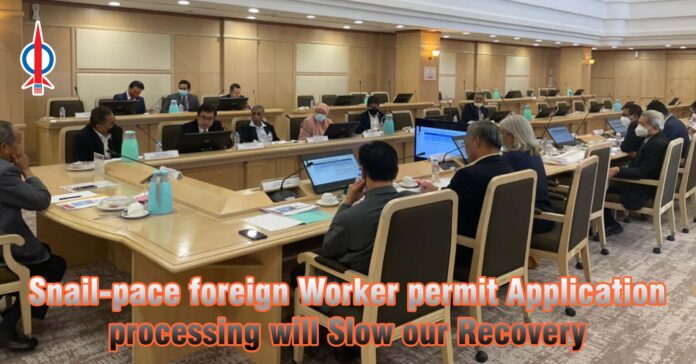 This is the issue that I raised in today’s National Recovery Council’s sub-committee meetings at the Ministry of Finance, Putrajaya.

According to the report of Ministry of Primary Industry, last year, the country lost an estimated RM10 billion in revenue because of the lack of workers in the oil palm plantation to harvest the fruits.

That humongous loss of RM10 billion revenue is only the oil palm industry.  If we include all the other industries, the loss of revenue suffered by the country as a result of the lack of foreign workers will be manyfold.

The figures shown by the Ministry of Human Resource was that as at February, 2022, we only have half the number of foreign workers compared to the figure back in early 2020 before the Covid-19 pandemic hit us, that is approximately 1 million foreign workers short.

So far, despite much hue and cry by all sectors of the economy, the government is still unmoved about the situation and the processing for applications for foreign workers is done at snail pace.  The Government must be made to realised that each day’s delay would mean loss in revenue to the country in the millions.

Unless the government address this worker shortage issue urgently, our country will lag behind the other countries in our economic recovery.  As such, the National Recovery Council must put the Ministry of Human Resources and Immigration Department on the spot so as to expedite the resolution of this problem.