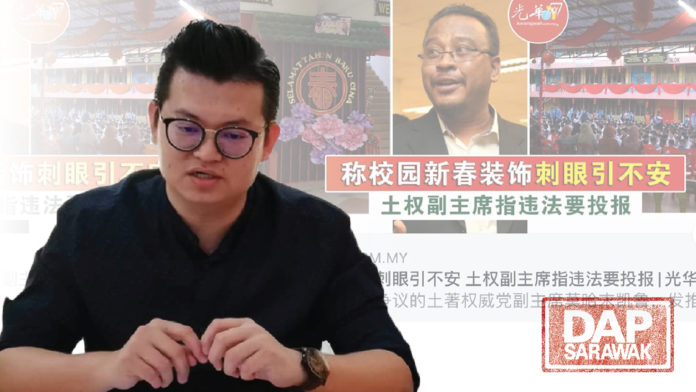 The threat by Parti Bumiputera Perkasa Malaysia (PUTRA) to a school in Puchong to take down its Chinese New Year decorations or face legal action is certainly highly regretted and has no place in a multi-racial multi-cultural country like Malaysia.

It is highly regrettable that there are certain quarters in our country that are so insecure and deliberately chose to spread fear and divisive sentiments in our country.

Their arguments that festive decorations in any public place, be it for Hari Raya, CNY or Deepavali or any other festive occasion, is unconstitutional is unfounded and therefore not legally binding.

Thus i regret the actions of principal that gave in to the threats of such extremist, as they should not have take heed to PUTRA’s baseless threats and maintain the said decorations.

I have yet to hear of anyone forcing their religion upon anyone else on such festive occasions and I highly doubt that the said decorations contain any religious elements and were merely decorative in nature.

For so long, Malaysians have enjoyed these festive occasions together as a people and such a tradition must continue.

It is time for us to build bridges between races in this country at a time when racial tensions seem to be at an all time high.

The Education Ministry must launch an inquiry into this episode and set a proper guideline so no one will succumb to such baseless threats anymore. The authorities should also come down on these extremist regardless of race or background.

Schools should be a place to foster understanding, tolerance and respect. It should not be held-ransom by bigots and extremist in our society.