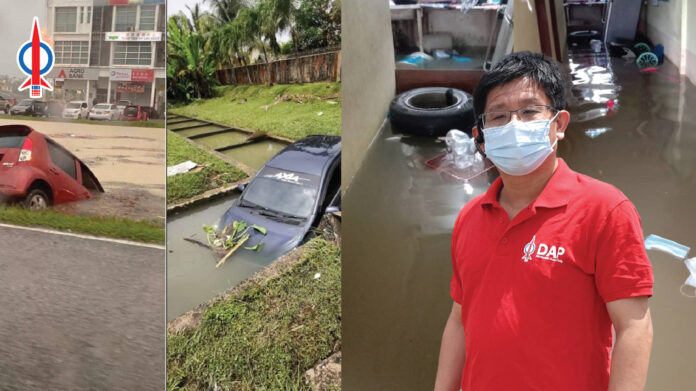 Kuching is once again hit with flash floods as incessant rain that lasted throughout the night. This has become a frequent occurrence during the rainy season. Major areas in the city and suburbs become impassable due to flash floods. Over social media, pictures of cars went into the drainage, and houses flooded with damaged furniture became common. As for last night, during the wee hours, social media and phone ‘messaging’ apps started to come alive, with residents voiced their concern on the rising water. Sadly these are the ordeals Kuchingnites have to deal with as their homes become inundated for the second time this year.

On the ground, people want an answer. No amount of explanation can justify the frequent occurrence of flash floods. The situation doesn’t seem to be getting better, nor the state government has taken any tangible actions. Where are all the flood mitigation projects that have been promised and talk about for many years? It has become a topic during the election. It remains just that, a verbal promise with no tangible actions.

To name a few, the long-overdue flood mitigation channel to Batang Salak, which was suggested as early as 1991, two decades later, remains just that, a mystery. No explanation despite the elected rep’s question for its progress.

In most of the city area, flash floods can be avoided if not due to poor drainage overdue for maintenance and upgrade. In most of these areas, an hour or more heavy rain is enough to flood the area with water coming into houses. Multiple complaints have been raised with action yet to be taken by the council. And the wait continues.

The Minister for Local Govt & Housing Sarawak Dr Sim Kui Hian needs to step forward and lay down the details to mitigate the flash flood issue, both long term, and short term. The ministry owes it to the people why the situation has not been improving. In most places, flash floods can be avoided if not due to poor drainage that has yet to be dealt with despite numerous complaints lodged by the people and elected reps. What we need is not just promises. We need plans and a detail timeline on what will be done and when it will be completed.

I urged the Minister for Local Govt & Housing Sarawak Dr Sim Kui Hian to be transparent and be thorough. Voters have the right to know the detailed timeline of all the projects that are in place that will help mitigate flash floods, even if it is only on drainage upgrading. Actionable plans and deadline, no more promises, period.