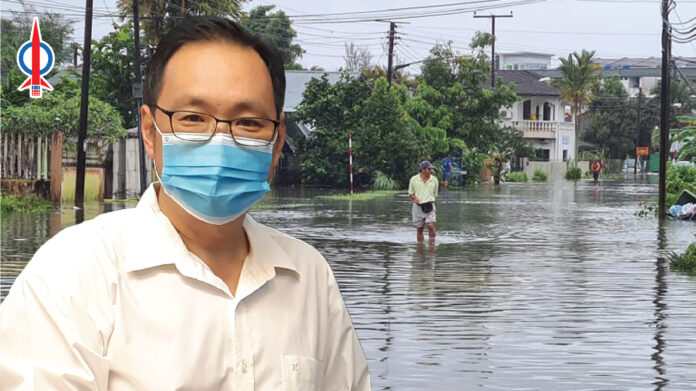 As the Minister for Local Government and Housing, Dr Sim Kui Hian should be answerable to the people of Kuching for this morning’s flash flood hitting many areas in Kuching. This is the second time this year that such major floods happened and we are only in February this year.

Urban drainage is under the portfolio of the Local Government and Housing. After hundreds of millions and even billions spent over the years, it is most unacceptable that the Kuching city’s drainage system does not have the capacity to effectively discharge one night’s rainfall.

Rapid housing development is not a valid reason for such flooding as in all housing development projects, the developers are required to carry out the construction of proper drainage system before the Occupation Permits for the houses can be approved and issued by the local governments.

The job of the Minister for Local Government and Housing is, among others, to ensure that there is an effective drainage system for the city.

If after so many years of city planning and development and so much taxpayers’ money spent, yet the city’s drainage system cannot even cope with one night’s heavy rainfall, that speaks volume of a badly done job by the ministry.

Therefore, I call upon Dr Sim to focus on the job under his ministerial portfolio rather than busy doing re-reporting of the announcement of the Sarawak Disaster Management Committee (SDMC) and his propaganda in facebook postings, which in some cases, he has made unclear reporting thereby causing unnecessary anxiety amongst the people.

The SDMC has the DCM to take charge and the experts to deal with the Covid-19 pandemic, announcements were made through press conferences and media statements and the State Government has the Unit Komunikasi Awam Sarawak (UKAS) to also help carry the news. There is no need for Dr Sim to add on to do re-reporting when there is so much more under the Ministry of Local Government and Housing that needs to be done, yet not done.

Lastly, for the flood that occurred today, Dr Sim must come forth to give an explanation and be held accountable to the victims of the flood.