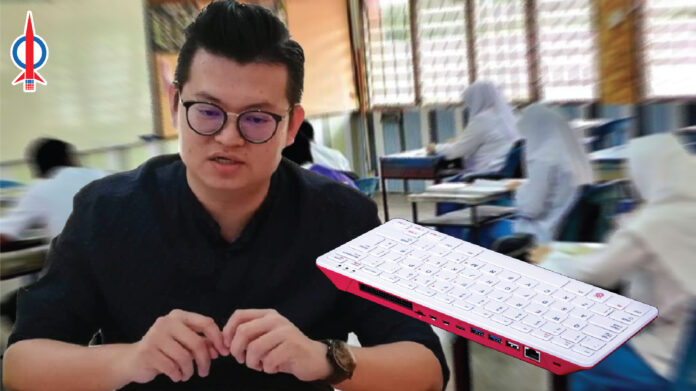 First and foremost, I would like to thank the Minister YB Datuk Amar Michael Manyin on the transparency shown in answering important queries on State Government’s intention to purchase Raspberry Pi for usage of primary schools in Sarawak. Such queries are important and should not be simply dismissed a “politics” as it is essential to make sure that there are no wastage or unfair enrichment of cronies but it reaches and achieves it intended target which is to provide a conducive learning environment for students.

However, his answers have opened up more questions and also revealed how the deal in place for the purchase of about 10k of such Raspberry Pi for RM 1,191 each including a 19.5-inch onitor, keyboard, mouse and preloaded software is actually inflated, and cost much more than what it is sold in the market.

Current market price for a Pi4 4GB is RM 220, a SD card about RM 15, a 19.5-inch monitor at around RM 250 and a keyboard and mouse around RM depending on specs. So, all and all, each full set should cost about RM 600+ which is almost half or 50% of the price quoted by the State Government.

Fact of matter, since the State Government is buying in bulk(>10k), the prices should be more competitive. That is why it is important to know if the sourcing and procurement of such computers were done by open tender or not, in order to obtain a more competitive price.

On top of that, due to such computer running on a less familiar Linux Operating System(OS), more training and even follow-up has to be given to the teachers to make sure they know how to utilise such computers to teach their students.. This is not only an extra technical hurdle, but also logistical hurdle especially to provide training, maintenance and follow-up especially in the rural areas.

If the teachers do not understand or know how to fully utilise it, the students are the ones that get short-changed.

While Raspberry Pi computers can open Microsoft Office documents (.docx, .xlsx, .pptx)through the Open Source Office Suite, based on feedback, many of these software do not run as smooth on these Raspberry Pi’s in comparison to the normal Microsoft based laptops.

In fact, based on current market, they can purchase a 64bit PC that runs on Windows 10 on Celeron N4100 for only about RM 800+. When it is purchased in bulk, we may even get a cheaper price than that. Majority of teachers and students are more familiar with such OS and there isn’t a need for initial training which may be an extra hurdle for its implementation.  These hardware are more future proof as it can be upgraded with Graphic Processor Units (GPUS), Solid State Hardrive (SSD) if we need to run more intensive courses such as 3D Modelling, Graphic Designs etc.

The installation of Software such as Windows 10 Education is not as expensive as claimed by the Minister as well. The Ministry can actually write to Microsoft to apply for free license which is provided for public schools. In this period of Covid-19 virtual learning will be much easier on a proper Windows 10 machine. Many software including “Zoom” is not officially supported on the Raspbian OS and need to be run through browser workaround.

With normal PC, we can save cost on the extra trainings to familiarise the teachers with Raspberry Pi. At the end of the day, why create hurdles for implementation, entry barriers, unfamiliarity, different training, call centres..etc, when there are other affordable alternatives that create less hurdles such as these. We must be breaking entry barrier, not creating more.

I suggest the Minister set up a dialogue with the different stakeholders especially the actual teachers that are on the ground especially those that are teaching STEM in the rural areas. Some have tried deploying Raspberry Pi in their schools including those in the rural areas and many have given feedback that it is not practical.

All these questions are important and while I commend the Minister’s initial transparency, I hope they provide further clarification on this. This not only involves public money, but more importantly the education of our children, and thus a proper decision must be made taking into account the local context, feedbacks from stakeholders and suitability of it in providing a holistic learning environment for our children.