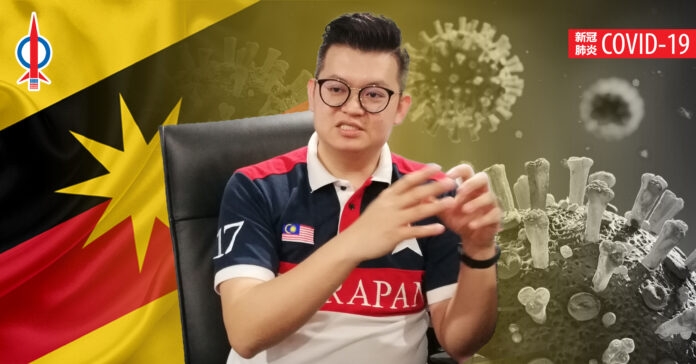 I strongly caution the Sarawak State Government against pushing for an early lifting of the Emergency that is supposed to expire at end of February 2022 which will pave way for an automatic dissolution and early election, rumoured to be in November or December 2021 due to the current Covid-19 increasing trends in Sarawak.

Based on latest data released by MOH, we have seen an increasing trend of hospitalisation of patients especially those in Category 3-5.

As on October 20th in Sarawak, hospital admission( 7 day average )is at 442, which is a +16% increase trend for past 7 days. This is the 3rd highest in Malaysia after Selangor and Klang Valley.

This increase is probably due to the vaccine’s waning effectiveness over time and the relaxation of more restrictions among the public.

Even though we have a relatively high vaccine population of 72.2%, but we cannot be complacent and take things for granted especially when it comes to an election where there will be high movement of and congregation of people, which will increase the spread of the disease.

On top of that, Sarawak is currently still only in the early stages of administering booster dose to frontliners and high-risk communities especially in view of concerns of waning vaccine effectiveness over time based on real world data.

That is why the main question is, why would the State Government want a possible election especially since we are still under emergency until February 2022?

That is why i strongly caution the State Government against an early election but instead together with Federal Government focus on 4 main things before considering calling for an election;

(1) Ensure full implementation of Undi18 and Automatic Voters Registration(AVR) which is scheduled to be at December 2021. This gives the right for them to vote and be part of the democratic process in determining the future of Sarawak and our country.

(2) Focus on administering the booster those to all vulnerable and high- risk groups in Sarawak to ensure they receive adequate protection especially in view of waning vaccine effectiveness over time. This will help reduce hospitalisation and possible death especially among the elderly with comorbidities and those immunocompromised.

If we can cover this whole groups by end of the year, they will be much better protected in view of a possible election next year.

(3) Focus of administration of vaccines to our adolescents(12-17years old) to ensure all of them will be vaccinated by year end in view of opening of schools.

(4) Come up with necessary electoral reforms and proper SOPs to ensure a safer election process including staggered voting, and more voting days to reduce congestion.

The EC must ensure that the entire election process is safe and in line with public health protocols. The EC must review existing polling stations to ensure they are still suitable for use. In the last general election, several polling stations, especially those in urban areas, were packed with voters lining up for their turn.