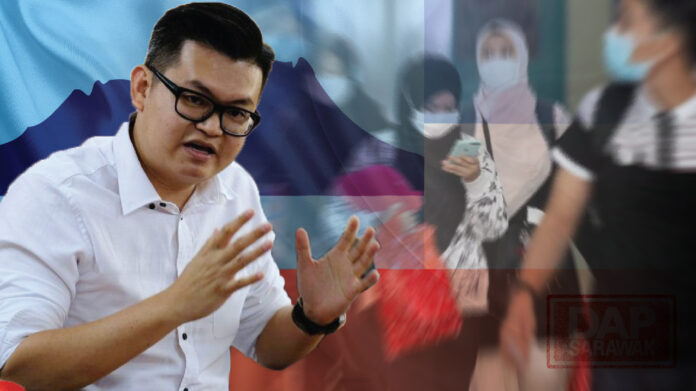 I strongly believe there is an urgent need for strong political leadership in Sabah especially in controlling the outbreak of Covid-19 in the State which has affected not just the State, but also have national consequences.

The GRS state government decision to take away the health minister portfolio has not only downplayed the importance of health especially during a pandemic, but more importantly caused a vacuum in leadership especially when they failed to provide a clear state point person to lead within Sabah itself.

That is why if the GRS State Government is not providing the necessary leadership, I call the Federal Government especially the Federal Ministry of Health to step in and be hands on with the response to the outbreak. Besides the Minister of Health himself, he has 2 other Deputies, that can be stationed in Sabah to collaborate with the State Health Director and leadership of the State until the pandemic is under better control.

This will show political leadership and real concern on happenings on the ground, rather than trying to dictate things all the way from Putrajaya. Decentralising of response is important in this context, especially in the case in Borneo, where conditions and the problems they are facing are starkly different. The policy model of one-size-fits-all based on Peninsular Malaysia does not fit with Sabah’s local conditions.

While Sabah has declared high numbers of cases for the past few days, 429 cases yesterday, but what is even more concerning is the amount of “sick” or highly symptomatic patients in Sabah in comparison to the national average.

The 43% proportion of Sabah’s Covid-19 patients who are sick enough to require hospitalisation is more than triple the 12% of Malaysia’s overall Covid-19 cases back in early April who were in the third to fifth stages of disease.

That means four in 10 coronavirus patients placed in some form of facility in Sabah are ill enough to be hospitalised, according to Ministry of Health (MOH) statistics, amid soaring Covid-19 infections in the state.

This again paints another concerning picture where if that the ones entering the system and being detected are already sick, does that means that based on trends elsewhere, there are still a huge majority of asymptomatic that are yet to be detected, due to maybe insufficient testing or limited contact tracing? This is of top of the amount of unlinked-community cases that are being detected.

That will mean that the 300-400+ that are reported daily may not be the full picture of the disease burden in the state, as we may be looking at a much higher numbers especially if we expand the testing capacities in the State.

Such questions has to be answered by our leaders, not just on whether there is sufficient testing, but also their strategy of testing, their plans on how to increase it, to fasten the testing process, to increase testing laboratories to cut down the waiting periods..etc. The public has the right to know why are they so many “sick” or symptomatic in Sabah. Besides possible low testing rate, are there other systemic reasons such as y lower community immunity, malnutrition, poor health promotions in the State..etc

That is why hands-on leadership is so important, to properly determine the situation on the ground and not just paint a blanket picture that everything is under control. While I understand the need for everyone to remain calm, but the best way to assure the people is to address the gaps in policies and make sure health protection is promoted.

We hear of healthcare workers sharing their stories how hospital beds were full of sick Covid-19 patients, as medical frontliners struggle with what they described as understaffed hospitals and working continuously for more than 24 hours due to co-workers contracting the coronavirus.

Sabah’s public health care system seems to face a real risk of being overrun with sick Covid-19 patients, and that is why leadership is urgently needed. This is because what happens there also affects us here in Sarawak, and also whole Malaysia.