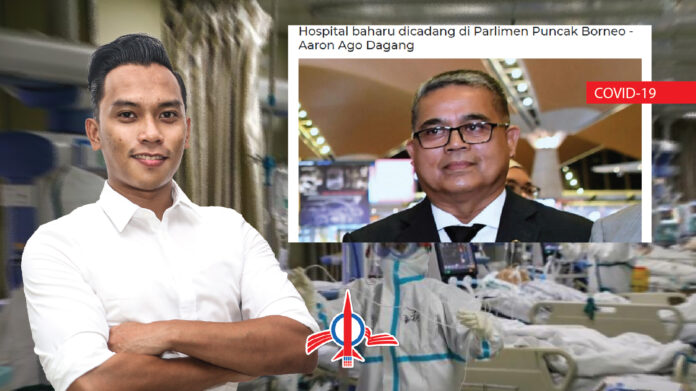 Current Malaysia Cabinet has one Health Minister and two Deputy Ministers. Out of two Deputy Ministers, Aaron Ago Dagang is the only one from Sarawak. Coincidentally, he’s the current Kanowit Member of Parliament (MP) who held the position since 21st March 2004.

Unfortunately, since his appointment as the Deputy Minister of Health, he rarely spoke to the public pertaining to the current situation of Covid-19 pandemic particularly in Sarawak.

The last time Aaron appeared publicly was on Dec 2020 when he announced that the federal government will build a new hospital at Puncak Borneo.Since then, no official news was reported or made by him. This raises questions among many Sarawakians wondering the Deputy Minister’s whereabouts as he seems to be politically Missing in Action (MIA) and has been invisible on the ground.

Today, the Sibu Municipal Council (“SMC”) Chairman Clarence Ting said that after he checked with the Sibu Health Department, he warned the public as more positive cases were confirmed this morning.

Yesterday, Sibu Rural Distric Council (“SRDC”) Chairman Sempurai Petrus Ngilai has tightened the standard operating procedure (SOP) and compliance at public places under its jurisdiction following the outbreak of Covid-19 cases and the emergence of the Pasai Siong Cluster .He listed out these areas including markets, ‘tamu’ and food courts in at Sibujaya, Stapang and Selangau.h

It seems like both Clarence and Sempurai are the only politicians that came out to calm the public. However, it is rather perplexing as to why Aaron seems to be MIA and invisible? As the Deputy Minister of Health, he should come out issuing a statement to clear the air and ensure the public to remain calm like what Clarence and Sempurai did.

Therefore, the public expects Aaron to have more empathy on the current situation.