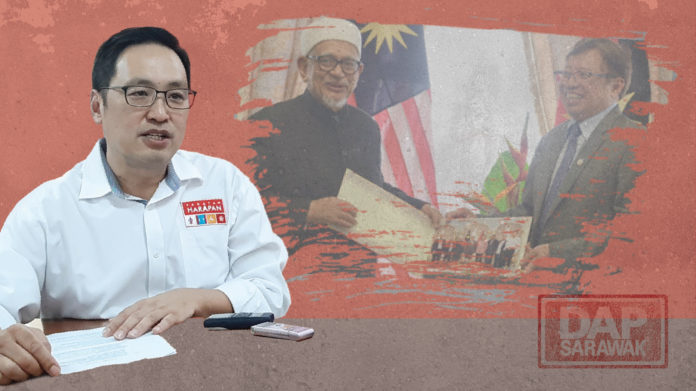 On 16th September, Malaysia Day, Hadi Awang openly resorted to hate speech about DAP wanting Chinese to control Sarawak. Such racist statement is totally untrue and have no place in Sarawak. It is such statement that has brought about the racial tension in Peninsular Malaysia and now Hadi Awang is bringing its PAS brand of racial politics to Sarawak.

A day late on 17th September, Hadi and his PAS delegation met up with Abang Jo to discuss the co-operation of PAS and PBB.

Though Hadi openly claims that PAS is working with GPS as a whole, the truth is that, it is only PBB that PAS is interested in working together. To PAS, all the other GPS component parties like PRS, PDP and SUPP are irrelevant because these subsidiary GPS parties will only take instruction from PBB.

In the past, the Sarawak state government has resorted to banning the entry of Pakatan Harapan leaders into Sarawak despite the fact that those PH leaders were merely advocating against corruption.

Now, we have PAS leaders coming to Sarawak advocating racial politics and instigating hatred against Chinese and spreading racial discord. Yet, the GPS State Government welcome these PAS leaders with open arms.

With Hadi Awang making such racist statement in Sarawak, the State Government should immediately exercise its immigration autonomy to escort him out of Sarawak and never to have him enter Sarawak ever. Yet, to the dismay and great disappointment of many Sarawakians, instead of banning Hadi Awang from entering Sarawak, Abang Jo is now working together with PAS.

When PH leaders could be banned from entering Sarawak just because they are advocating against corruption, it is puzzling that PAS leaders are allowed to enter Sarawak propagating racial hatred. It is thus obvious that the GPS only exercise its immigration autonomy to protect its political power and not to protect Sarawak from these socially destructive elements.