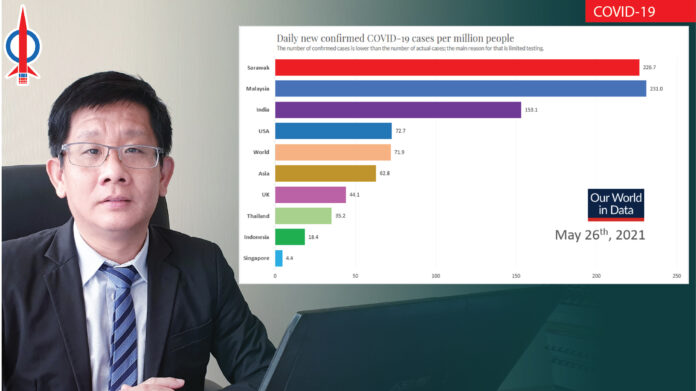 The AstraZeneca (AZ) registration fiasco was nothing but expected. They were many warning signs that the systems do not have the resiliency for upscale. There seems to be no meaningful effort put into improving the system despite the earlier setback. Both the 1st and 2nd rounds of the AZ vaccine registration process experienced glitches, with the latter more severe.  More people now are aware of the benefit of AZ vaccine and rushing to get themselves registered on a first-come, first-serve basis. On the 22nd of MAY, another system issue occurred, which also caused delays and long queues at registration counters in all the Pusat Pemberian Vaksin (PPV). As a result, the vaccination figure dropped to around 45’000 doses compared to the previous high, at more than 80’000 doses.

After the second round AZ registration fiasco, the RM 70 million National Covid-19 Immunisation Programme (NCIP) data integration and appointment system also come into question. Many experts in the field deem it substandard, with many ‘unacceptable’ rookie mistakes which glitches like that day are only waiting to happen. More shocking, based on World Health Organisation (WHO) recommendation similar total solution system should not cost more than RM20 million. At 70 million, it is more than x 3 the recommended price. We should be getting a premium product, from a technical aspect down to having a seamless user experience. Sadly, that is not the case!

The Rakyat has been severely short-changed and furious as this is a critical time that such oversight failure potentially put people’s lives at risk. There seems to be no improvement to the MySejahtera apps, despite knowing that out of the 31’776 who got their appointments, more than 50% or 18,215 failed to respond. Further investigation into the matter by JKJAV shows that About 30%  of people did not know that they received their appointments via the app.  A further 15%  did not know they need to confirm their appointment. How can a premium total solution system that had cost taxpayers RM 70mil still can have those eagerly waiting for vaccination to missed their appointment? To rubs salt into the wound, the hotlines were hard to access. At this stage, those who missed the appointments are those of the high-risk groups. They are the elderly and those with comorbidities and underlying diseases. Most, until now still failed to get their re-appointment. How many of the near 20’000 infected with Covid19 during this waiting period? And of those infected with Covid19, how many have been hospitalized? Has the RM 70 million systems failed us?

The MySejahtera should incorporate the ‘Hard to missed’ urgent notification alert into the first ‘check-in’ screen. The MySejatera apps should be able to cater to all regardless of their level of tech-savviness. We expect a no-brainer from a system that costs us 70mil or 3 times the WHO recommended cost.

It appears there is a miss-match, the eagerness of the Rakyat to get vaccinated versus the ‘lack of the spirit of excellence’ from the government execution and oversight. According to ‘Our World in DATA’, our daily new confirmed COVID-19 cases per million people as of 26th May are the highest in the world, even if we were to look at Sarawak state alone. Our daily infected numbers are at all-time high. We keep breaching the previous high record in daily infected cases. Daily covid-19 testing remains at the disappointing rate of 70’000 per day instead of the targeted 150’000. With the low testing number, the actual infected target can be even much higher.

The PN government has failed us all. It is time for the PN government to stop undermine democracy. To put down our political differences and address such shortcomings. We need to reconvene Parliament and allowing the Parliamentary Select Committee to an oversight during the pandemic crisis. The people have elected the Member of Parliament to be their voice, stopping the due process (reconvene Parliament) are denying the rights of the people. It is unthinkable that now the Members of Parliament need to try to get the attention of various ministries via Facebook. We can do better than this.