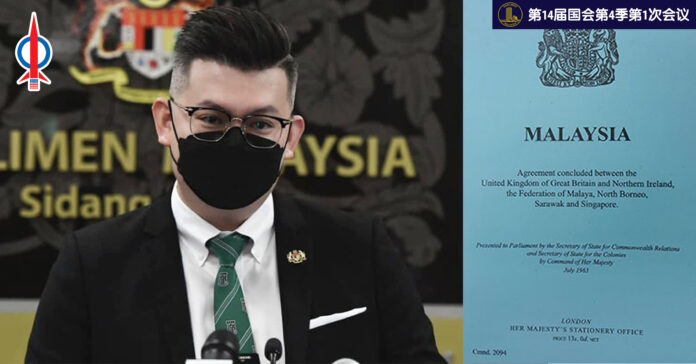 It is disappointing that the Minister in the Prime Minister’s Department (for Sabah and Sarawak Affairs) Datuk Seri Dr Maximus Ongkili again said that there was no requirement to disclose discussions on the MA63, contrary to the demands and wishes of the people of Malaysia especially when it comes to an such an important issue of public interest.

This is a continuation of the practices of the previous Perikatan Nasional 1.0(PN 1.0) government which continues to give excuses that the reports were technical and involved confidential documents which needed to be protected.

Such secrecy and non-transparent dealings in the past are what resulted in Sabah and Sarawak gradually losing our special rights under MA63 and somehow the government which includes the current GPS State Government has not learn from their mistakes when they were part of Barisan Nasional.

When Pakatan Harapan formed a high-level Special Cabinet Committee to discuss tangible steps to restore what is rightfully ours, a total of 17 out of 21 matters tabled by the Sabah and Sarawak governments at the Cabinet special committee meeting to review the implementation of MA63 were jointly approved under the Pakatan administration.

The other important decision made then under PH was the formation of a bi-partisan Parliament Select Committee to monitor the implementation of all items that were agreed upon so that there is transparency and accountability and that it can be implemented as soon as possible especially when it comes to something so important.

However, after the formation of the PN, not only was the MA63 report put into the Official Secrets Act (OSA), but the agreement to form the bi-partisan Parliament Select Committee was cancelled and because of that, the people of Sabah and Sarawak were deprived of accountability to monitor what was agreed upon and kept under the dark on progress of its implementation.

When I brought up the importance of such report be taken out of OSA in Parliament, and also the question what was done in the past 1.5 years on MA63, the Domestic Trade and Consumer Affairs Minister Dato Sri Alexander Nanta Linggi somehow answered in Parliament and proclaim that one of the things they done under PN is the success of Sarawak obtaining the rights to distribute liquefied petroleum gas (LPG) in the State without the need any longer to apply for a licence from Putrajaya.

However, such agreement to ease the process of distribution of LPG in Sarawak without need to apply permission from the Ministry of Domestic Trade and Consumer Affairs (KPDNHEP) was one of the 17 items agreed in the MA63 report done under the PH Government.

That is why there is a urgent need for greater transparency and accountability and the MA63 report must be made public so that the public themselves can see the progress of the implementation of what was agreed upon rather than our rights being used as a political tool especially during the upcoming elections.

There is a strong need to correct historical and economic grievances when it comes to MA63 and this has to be done transparently and be monitored by a bi-partisan Parliamentary Select Committee. We cannot continue to remain as a territory rich in resources but yet its people remain one of the poorest in the country any longer.

That is why I strongly urge the Perikatan Nasional 2.0 government to de-classify the MA63 report and form the bi-partisan Parliament Select Committee to monitor its implementation. All MPs including those in government must agree and push for this issue.

Such agenda must be a bi-partisan agenda and must not be done in secrecy as it involves not just the rights of our people but also the rights and future our children’s children.