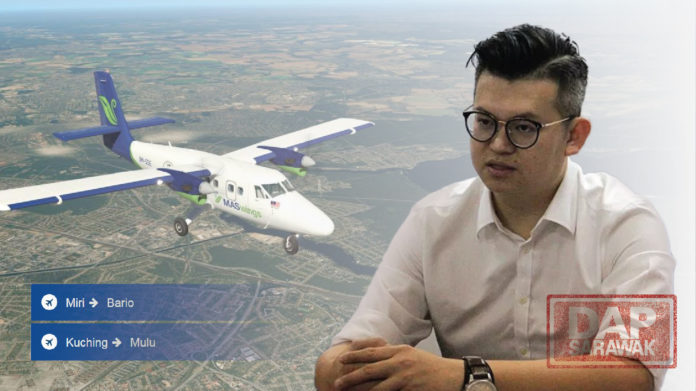 I have spoke to the Transport Minister YB Anthony Loke on the decision by MASWings to drastically increase airfares rates for foreigners for certain routes in Sarawak including Miri-Bario, and Kuching- Mulu which will have a big impact on the local tourism industry and also the socio-economic status of those in the rural areas who rely heavily on touristic activities.

I was informed that the reason for such decision is the increasing cost of subsidy that the Federal Government needs to give to sustain such routes and flights. Currently it cost more than RM 200 million annually for the subsidy alone and thus the decision is so that the subsidy will more targeted to benefit local Malaysians especially those from rural areas instead of subsidising foreigners.

However, while I understand the reasoning to prioritise locals for subsidies, I have requested for the Ministry to reconsider this decision especially since it will have cascading effects especially affecting foreign tourist numbers to those areas thus affecting the livelihood of the locals who rely heavily on touristic activities in their area.

This also will affect our target for the nationwide Visit Malaysia Campaign 2020 as many tourists will think twice to come due to the high cost of flights to the area. I have requested the Ministry to come up with a more pragmatic rate and not have such a drastic surge in prices that may suffocate the growth of the growing touristic industry in those areas.

The Minister has responded positively and will discuss further with the management of MasWings in view of the possibility to restudy and review the new rates come up with a reasonable way forward. He is also open for further engagement with different stakeholders on the issue.

I will continue to follow up on this issue and will also bring it up again during my Parliamentary debates. We want to see more tourists coming into Sarawak to see the natural beauty and also experience the warmth of Sarawak hospitality.