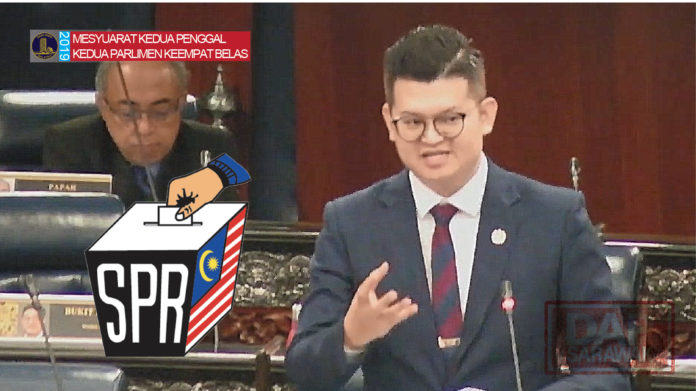 The Election Commission(EC) should allow Sarawakians residing in Kuala Lumpur, Johor, Penang and other big cities to vote as postal voters or come up with an effective mechanism for them to be able to vote in the cities they are in so that their rights to vote will also be protected regardless of where they are especially in view of the upcoming Sarawak State Elections.

In my debates in Parliament, I pushed for the EC to implement such system as there are currently about 200,000 registered Sarawakian voters that are residing in these cities in Peninsular Malaysia either for work or even studies. These figures has not taken into account the new registrations as well as the implementation of the automatic voters registration which will significantly increase these figures.

By allowing them to vote in Peninsular itself or as postal voters, this will the boost the voters turnout as well as remove most obstacles for them to fulfil their right and responsibility as a voter. For many of these workers or students, to fly back to Sarawak to vote is not just about a flight to Kuching/Sibu/Miri, but may also require a long boat ride, or even Hilux ride into the interiors just to reach to their kampung or long house. This not only takes time and leave from their work or studies, but may cost a lot of money which many may not be able to afford.

The uncertain polling date that could fall after the semester break or a major celebration may also pose an inconvenience for many to go home to vote as they will then have to pay extra to go back during to vote after spending so much to be back for the celebration. For students, if it is not during their semester break, they will need to skip their classes for a long time just to fulfil their responsibility to vote.

That’s is why I strongly believe that all Sarawakians right to vote should be strongly protected and these obstacles should be addressed to facilitate them to better fulfil their voting responsibility. They should also have a say in the running of the State and that right should not be taken away just because of logistical issues or even cost.

On top of bringing it up in Parliament, I have met a few times with the EC Chairman MR Azhar Azizan Harun to discuss this matter. He is positive about the intention and we will be setting up further meetings to follow up on the progress on the decision.

Will continue to push this matter as we strongly believe that the right to vote for every Sarawakians should be protected and we should facilitate all of them to exercise their right to vote in the upcoming elections.