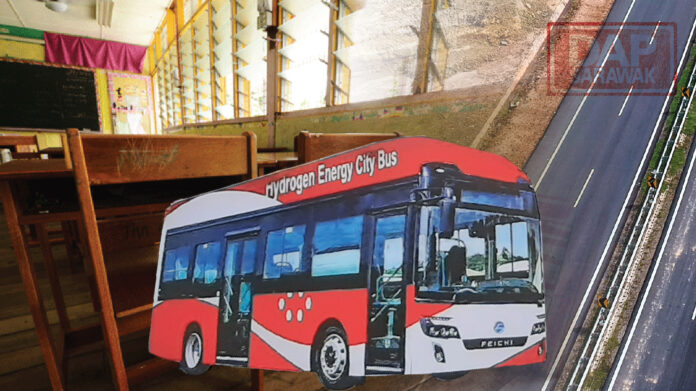 I urge Chief Minister Abang Johari and the State Government to be more transparent including revealing the cost of the project, contract details with the said company involved and most importantly the economic feasibility study and cost-effectiveness analysis of the usage of these hydrogen buses, in comparison to other renewable energy powered buses including the common electric buses.

Since the announcement of the introduction of hydrogen bus in 2017, the trail run since August 2019, and also the opening of the bus for public usage in January 2020, the State Government has yet to reveal the feasibility and economic sense of the usage of such buses. Now, even since the implementation of RMCO and the resuming of public bus services, is there a reason that the hydrogen bus is yet to be seen operational in Kuching?

In October last year, there was already a problem with the bus and I believe the public has the right to know how much was spent to rectify that issue that time.

If the State Government intends to restart the usage of such buses in the near future, then it is imperative the reveal the cost-effectiveness of the usage of such buses, how much it cost per-km for the bus to travel in comparison to the common electric bus, especially since the cost of a hydrogen bus is almost double the cost of a common electric bus.

Abang Johari has once mentioned that the cost of such public transportation will be cheap, considering the fact that hydrogen is extracted from water, which is abundant in Sarawak. The reality is that, while water is abundant, and the problem is the amount of energy needed to electrolyse water into Hydrogen, and then convert it back into electricity to charge the batteries in the buses is not cheap.

On top of the production process or ‘electrolysis’ that is not cheap, the cost of building fuelling stations itself will also be costly. Storing and distributing hydrogen safely requires high speciality and thus will incur high cost.

Thus, since the beginning, I strongly question the direction Abang Jo and the State Government is taking with the introduction of these hydrogen buses, especially when in Sarawak our power is already largely renewable (70%+ Hydro) and an electric bus can easily charge using the grid anywhere, anytime, without investing in a non-existent hydrogen infrastructure and distribution network.

Battery technology is developing much faster than electrolysis. We now have supercapacitors that charges instantly, lower maintenance cost, superb lifespan that is already in advance trial even in China. TESLA has also since announce the development of new low-cost batteries designed to last for a million miles of use, making the price of electric vehicles more competitive and almost similar to the common gasoline engine cars.
Electrolysis on the other hand requires a huge scientific break though to be economically and scientifically viable.

Thus, I strongly urge Abang Johari to reconsider such implementation and not waste more money on a project that may not be cost-effective and feasible in Sarawak.

We have to be pragmatic in addressing the core issues of public transportation in Sarawak. We already have readily available renewable and sustainable energy through all the mega-dams in the State that can be pumped directly into a cheaper and simpler alternative, which is the common electric bus. Just because we have the money or a big reserve, doesn’t mean we can just simply spend it on items that will not be cost-effective for the people especially in the long term.