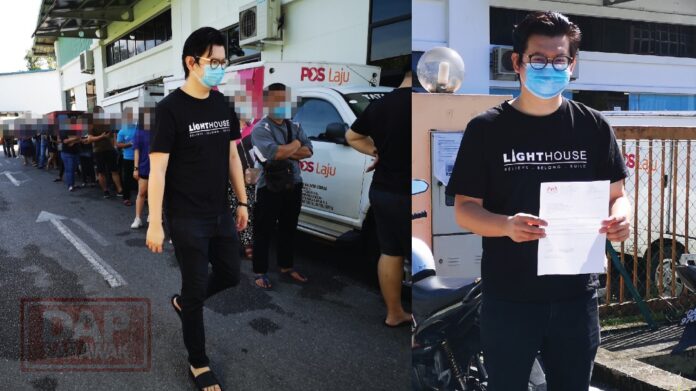 The government especially the Ministry of Communications and Multimedia should look into improving the poor services in all their Post Office including PosLaju especially during this Conditional Movement Control Order(CMCO) for the convenience of the public especially as we encourage more online or e-commerce to reduce the risk of crowds and also spread of COVID-19 in shops or shopping malls.

We have received multiple complaints by the public since the beginning of the MCO on how bad services are in post offices and Poslaju centres that people are forced to que up for long hours to do their business in the post office or collect their parcel from Poslaju. Due to the surge in online shopping and the use of courier services such as Poslaju during the MCO, many have complaint that their parcels take up to 2 months to arrive and in most cases they do not send it directly to the homes as normally done.

This is not supposed to happen as they have paid for the delivery charges. Instead, customers will have to go to the Poslaju centre for themselves and que up to 4 hours just to take their parcels. In some cases, parcels ordered from months ago also somehow get lost even though the online tracker states that it has arrived at the centre. We also received report of “runners” given special treatment cutting ques, delaying the whole waiting process for the rest of the public.

We are concern especially in some area, social distancing is not properly observed, and this runs the risk of the formation of a new cluster and the spread of Covid-19 especially among asymptomatic carriers.

I paid a visit to one of the Poslaju center and had a short meeting with the officers to better understand the issues faced as well as to give some suggestions to improve the services and cut waiting time for the public. They will implement some of these suggestions as well as look into hiring more part timers to make the necessary deliveries.

While I understand the inconvenience suffered by the workers of in both post office and Poslaju centres due to probable logistical issues due to the MCO, but yet the Ministry should look into ways to improve the service especially as they now encourage more people to get into e-commerce, or online businesses as we adapt to the new norm.

They should look into improving their delivery services, hiring more delivery person, investing into assets that will quicken the sorting of parcels and even opening more counters for collection.

In order to see an improvement in e-commerce business in our country, the government must be proactive to upgrade, and improve our delivery services, as well as to prepare to enhance services even during the CMCO period. Even after 2 months, nothing much has improved and, in some places, services has gotten worst.

While there are also other private courier services, the government should take the lead and improve their own courier services, Poslaju, especially in their efforts to further encourage e-commerce trading and also for the people to adapt the new normal. In countries such as China, one of the reasons for their booming e-commerce sector, is affordable and efficient delivery services. There is much for us to improve as we strive to reach those standards.