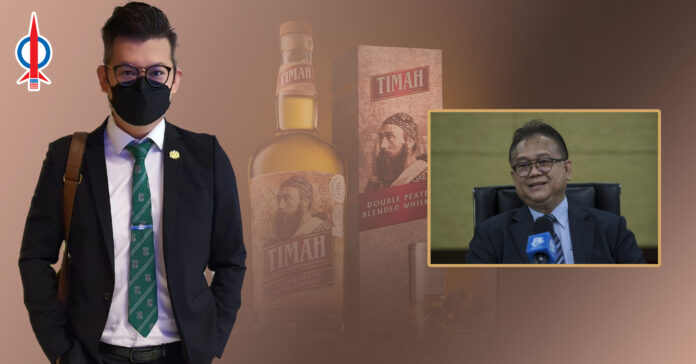 Even though the Cabinet recent announced that they had agreed for the “award-winning the whisky brand Timah” to keep its name, but this has set a dangerous trend and precedent in our country where we are sliding down a slippery slope of extreme conservatism at the expense of rights and freedoms of non-Muslims even in a pluralistic society like Malaysia.

Fact of matter, this “Timah” should not have been an issue in the first place for the Cabinet to convene and even to spend time discussing. An issue that is supposed to be a matter on “trade description and trademarks” has suddenly and senselessly been blown out of proportion to provoke a religious or racial controversy.

Fact of the matter, the Deputy Minister of Domestric Trade has confirmed in Parliament that the brand had already undergone all due diligence before having its name approved, including the two-month objection period to allow members of the public to assert their rejection. He confirmed that no objections were registered then meaning, from a legal perspective, the name is already legit.

So for it to be made an issue and at first being pressured into changing the name and image of their product, is nonsensical and if such political move is allowed to reign supreme, who would dare invest in our Malaysia? Can we realistically hope for a reinvigorated economy post-Covid? What is at stake here is not just a single brand of whiskey, but our market freedom and economic rationality.

On top of that, the recent announcement by the Kedah state governments of the ban on 4D gambling is another compounding worrying trend on top of the ban on the sale of spirits in grocery stores in Kuala Lumpur which shows how our country in sliding into extreme conservatism at the expense of the rights of others.

Such trend in Malaysia in significantly increasing especially when certain political parties chose to betray the election mandate by the people and instead put an extreme religious party such as PAS in power which has no to little regards to rights of non-Muslims in a pluralistic society.

These are signs of a failed government when they chose to remain silent in midst of grand corruption, wastage and bad governance, but purely focus on petty issues and moral policing.

Whatever the brand name, alcohol or gambling is forbidden in Islam, but the rights of choice for non-Muslims should be respected.

The government should have been focusing on addressing the core issue, which is how to educate the public against the hazards of drinking excessive alcohol or even gambling. The government should have put all focus on disseminating this sort of message and educating the public, not forcibly impose its extremist values on others which will instead push such alcohol and even gambling trade into the black market and allow illegal activities that are not regulated to fill the gap.

And here in Sarawak, we cannot think we are fully isolated from this and be naïve to think that this does not affect us. How about Sarawakians living in Kedah or working in West Malaysia that are affected by these extreme laws and restrictions? Do we not speak out for them too?

Eventually if a party like PAS continues to be given a foot in power, they have every platform to infiltrate and influence national policies including education that will have a huge bearing and influence on our children and future generation.

That is why the people must remember that political parties including those from Borneo that even fully knowing the direction of such extreme political parties, deliberately empowers them and put them in the position of power to influence. That is why this Sarawak and Melaka State elections is a good opportunity for the people of each state and region stand up bravely and send a message to these political parties and keep them accountable for putting such ultra-conservative party such as PAS in power.

We are a multiracial and multicultural society, and we should we take pride in moderation and move away from extreme conservative trends.