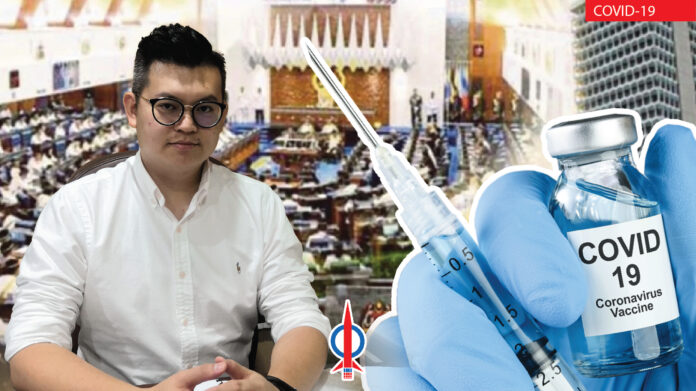 This is in view of certain quarters questioning whether the total RM70 million allocated for the NCIP data integration and appointment system is justified especially after yesterday’s AstraZeneca (AZ) registration fiasco.

We acknowledge that openness of the Coordinating Minister Khairy Jamaluddin to come out to explain that that sum is firstly a ceiling level set by the Ministry of Finance (MOF), and it also includes other deliverables including management and monitoring of the immunisation programme’s progress as well as development of a dashboard for daily reporting among others.

Even so, there must be greater transparency in all these expenditures including contractors involved, job scope and deliverables to avoid risk of abuse and possible over-profiteering. “Extraordinary times calls for extraordinary transparency”.

Fact of the matter, the public is not against spending reasonably for such important necessities, but they expect quality from the job that was tendered out, and from evidence from not just yesterday but previous incidents, there are indeed serious doubts.

On top of that, from the breakdown of the RM 70 million, it also includes expenditures for the Hotline and calling centres. For the past weeks, we have been receiving non-stop complaints on the Official JKJAV Hotline where many failed to call in or connections get cut off when they have an inquiry or also to make changes to appointment time and dates.

We are made to understand that such services were outsourced by the government to a third-party, but it is their responsibility to monitor to make sure quality is constantly being maintained.

As a result, due to the substandard quality of service rendered, many of the elderly who were unsure end up nor turning up for their appointment as they were unable to obtain required information from the hotline.

The main question that must be answered by the Ministry is whether the total RM 70 million allocated is actually reasonable for the job scope specified by the Minister. If we put it in comparison to the World Health Organisation (WHO) estimates from “COVAX Working Group on Delivery Cost, the recommended budgeting for innovations for a total of 1 billion doses or a 500 million population is at USD 91.2 million. This covers similar job scopes including data integration, digital micro-planning, appointment systems, n and others.

If we take that into account in our local context and our country’s target of vaccinating 28 million (80%) of our population, the total recommended cost for such items should only be around RM 18.07 million, which is almost a quarter of the amount allocated based on the public statement released by the Ministry.

That is why, we urge for the Prime Minister to reconvene Parliament to allow such important decisions to be debated and scrutinised. The Parliamentary Select Committee should also be allowed to provide parliamentary oversight over the rollout and approach towards the pandemic. During this pandemic, where billions of public funds of money is being used, it is of utmost importance that all matters, procedures and financial procedures of the country are complied, to make sure that people’s money is really being spent prudently and efficiently.

We must be allowed to play an effective role in providing a ‘check and balance’ mechanism in the democratic system to the Government as to promote the spirit of transparency and accountability, especially during this period.