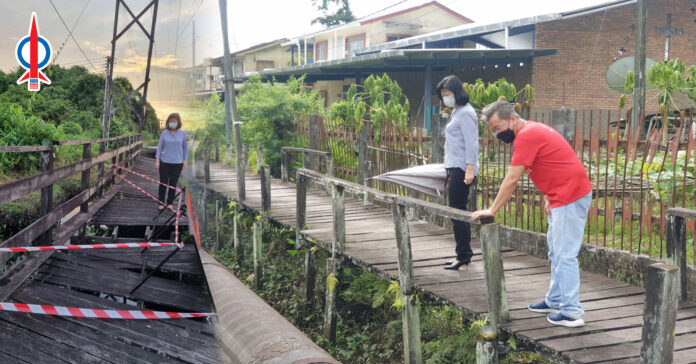 State JKR should heed the calls of the voices to repair and rebuild the wooden plankway along Jalan Oya which extend from the traffic junction to SMK St Elizabeth.

After receiving the few complaints, DAP Sibu has gone to have a look and found the plankway to be in a very desperate need of repairs with many broken planks and handrails.

However, due to wear and tear over the years, the plankway has fallen into a state of total disrepair with many huge gaps in between the broken planks. A pedestrian who is not familiar with the plankway could easily slip in between the huge gaps and fall into the drains especially if he should be walking at night.

DAP understands that even though many complaints have been made to SMC, nothing was done as the maintenance of the plankway is under State JKR. In any event, I feel that SMC should not have just ignored the requests for help but should have instead, directed JKR to look into the matter.

I now call on JKR to take urgent steps to rebuild the plankway for the benefit of the pedestrians. In fact, instead of the wooden plankway, JKR should consider building a cement walkway which is more lasting and more secure. Plans should also be put in place to widen the whole stretch of Jalan Oya from the junction till Jalan Tunku Abdul Rahman traffic junction as that stretch of road is always very busy and congested with traffic jams during rush hour.

Similarly, the authorities should also repair and upgrade the two bus stops opposite and next to SMK St Elizabeth. The bus stop railings of both bus stops are bent out of shape and are very unsightly. While the bus stops are obviously mainly used by the students of the secondary school during school days, they are also being used by those who stay in the neighborhood.

JKR should not continue to disregard the calls of the people to take immediate action to repair and rebuild the plankway as it is a source of danger to the people. It owes a legal duty of care to the people to provide safe public facilities for the usage of the public. By continuing to disregard calls to have it repaired, they would be exposed to a legal suit if any mishap should happen to any pedestrian using the plankway. I therefore urge JKR to take immediate action.