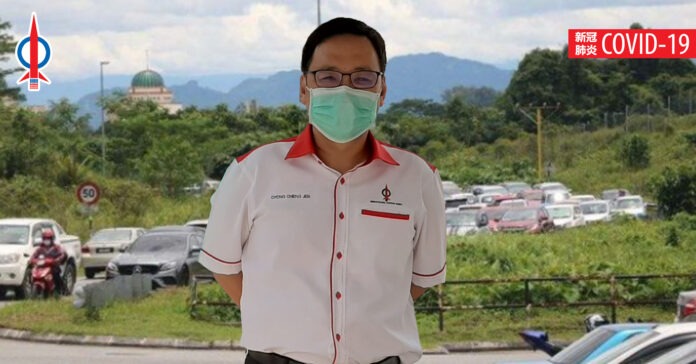 I have yesterday submitted 2 questions to the Parliament asking the Minister of Works to be answerable to the heavy traffic jams caused by the prolonged fly-over construction work carried out at the 3 junctions at 6th Mile, 7th Mile and 10th Mile of the Kuching.

The following are my questions to YB Fadillah Yusof who is the Minister of Works:

From my observation of the manner in which the works was carried out at those junctions, the progress is at snail-pace. More so, there is lack of proper traffic diversion and management especially during the peak hours of the traffic, thus aggravating the traffic jams at those junctions.

While public appreciates that road construction work will inevitably cause inconvenience to the road users, but the contractor undertaking the work and the governmentcan do much better to reduce such inconvenience and to shorten the time of the construction.

In this respect, neither were done to the public’s satisfaction. The so-called diversion lanes are insufficient and the pace of work too slow. The Government’s contract only provides for one shift of work per day instead of more shifts to expedite the work.

Furthermore, in most major cities around the world, construction of major road projects was carried out at night to minimise disturbance to road users during peak hours. For the fly-over projects, works were carried out during day-time, aggravating the situation.

As a result, commuters are unnecessarily stuck in traffic jam for hours on the road.

Fadillah Yusof, the Minister of Works, is a Member of Parliament from Sarawak. I urge that he paysa little more attention to the projects in Sarawak. It is not too much to ask of him to do a little more to help ease the problems faced by Sarawakians in the course of the construction works in this respect.

GPS Asked to Explain Why the High Figures in Covid

Common Prosperity For East & West & Respect For Religious Freedom Of All