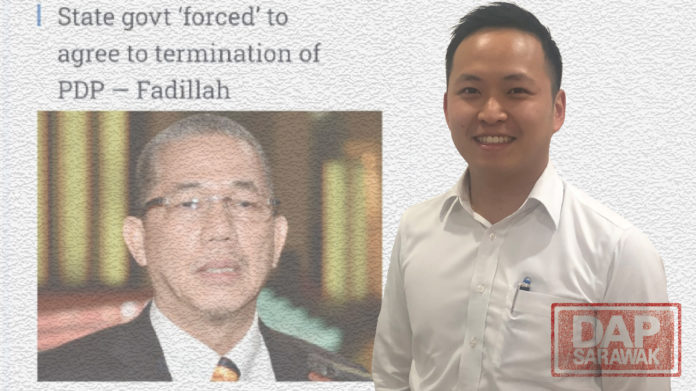 Is Fadillah using the cancelation of the Pan Borneo Highway PDP agreement to challenge the leadership of Abang Jo.

Our former Minister of Works, Petra Jaya MP Datuk Seri Fadillah Yusof’s claims that the Sarawak government was forced into agreeing to the termination of the Project Delivery Partner (PDP) agreement for the state portion of the Pan Borneo Highway project is laughable.

If it is indeed true that the State Government can so easily be forced and arm-twisted, then why did the Federal Government failed in its attempts to amend Article 1(2) of the Federal Constitution in April 2019? Fadillah Yusof who is the current Chief Whip for Gabungan Parti Sarawak (GPS) led the whole GPS lawmakers to abstain from voting in favor of the amendment.

Is Fadillah Yusof also implying that he is more strong-willed and persistent than his Chief Minister, Abang Jo? Whatever the answers are, such claims from the Chief Whip of GPS is alarming.

We cannot have a person who is weak to be at the helm of Sarawak. Surely such a person cannot be expected to be able to uphold the interests of the people of Sarawak.

I believe our Chief Minister is a better character than what his Chief Whip is painting him as.

As such, Datuk Seri Fadillah Yusof should stop trying to defend the indefensible and along with it, even belittle his own party as being weak and submissive to the federal government.

We all know how lopsided the PDP agreement was and canceling it was a move in the right direction. After all, how can we allow a contract which goes to enrich the Project Delivery Partner instead of reimbursing for actual expenses incurred?