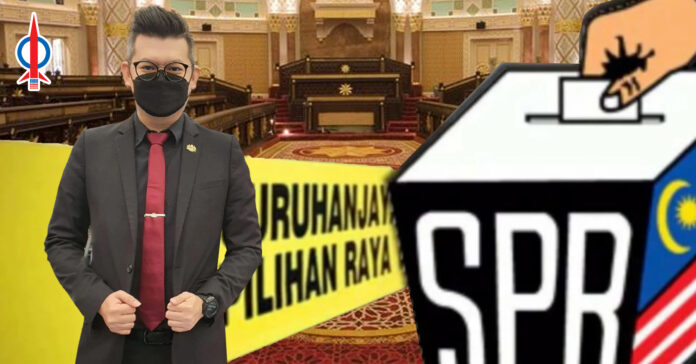 The Election Commission (EC) has clearly failed us Sarawakians and Malaysia as a whole as they have failed in their role to introduce the necessary adaptations and electoral reforms to not only help facilitate a safer voting environment during this pandemic, but also to encourage greater participation of voters in the upcoming Sarawak State Elections, especially for Sarawakians living outside Sarawak.

I have said it many times, the EC which is supposedly responsible to find innovative ways to promote greater participation in an election, has FAILED in their role even though they had about 2 years to prepare for it during this pandemic.

That is why, I tabled an Emergency Motion under Parliamentary Standing Order 18(1) to compel the Minister under the Prime Minister Department who oversees the Election Commission to justify the failure of the EC and to hopefully introduce drastic measures even during this parliament sitting so that Sarawakians living in West Malaysia/Sabah can vote where they are.

I suggested to the government that either allow Sarawakians living outside of Sarawak to be gazetted as postal voters or allowed to vote at special voting stations in the main cities in West Malaysia.

Absentee or postal voting would make it easier for voters residing in other states to vote instead of them having to return home and causing a possible spike in the number of Covid-19 cases, especially in view of the new Omicron variant.

As the Election Commission has an office in every state, these offices outside Sarawak could be used as polling stations to allow Sarawakians to cast their ballots.

In the interest of parliamentary democracy and in keeping with the principle of free and fair elections, the Election Commission must extend postal voting to all Sarawakians working or domiciled outside Sarawak, so that no voter is denied and deprived the right to vote on economic grounds.

This is especially true with high prices of flight tickets to Sarawak for the past weeks mainly due to flight restrictions into Sarawak by the State Government and Sarawak Disaster Management Committee(SDMC). SDMC cannot be seen as a political tool to create obstacles for people to come back to vote.

Anyways, all these can be solved, if we had proper electoral reforms as suggested including implementing the necessary standard operating procedures (SOP) to enable absentee voting or extending postal voting for those working or studying outside the state especially in Sabah and Sarawak.Some cost almost a whole month of salary for the common Malaysian.

The right to vote should not be reserved as a “right for the rich only” or those that can afford to fly back to vote.

All these can be solved, if we had proper electoral reforms as suggested including implementing the necessary standard operating procedures (SOP) to enable absentee voting or extending postal voting for those working or studying outside the state especially in Sabah and Sarawak

However, it is disappointing in their response to my debate, the EC continues to be reluctant to take the necessary actions to make such reforms, citing that postal voting or even absentee voting in selected areas will be costly and logistically tougher to do.

They even mentioned that people should change their voting area to the place they are currently staying for their convenience. I strongly disagree as people should be given the choice to choose where they want to vote especially their own home State.

That is why there is little political will for the EC to reform even if it is for the good and safety of the people. The government must be kept accountable and take responsibility for this.

Because of their failure to adapt and reform, we have seen a deliberate act of “voter suppression” which is against the spirit of democracy.