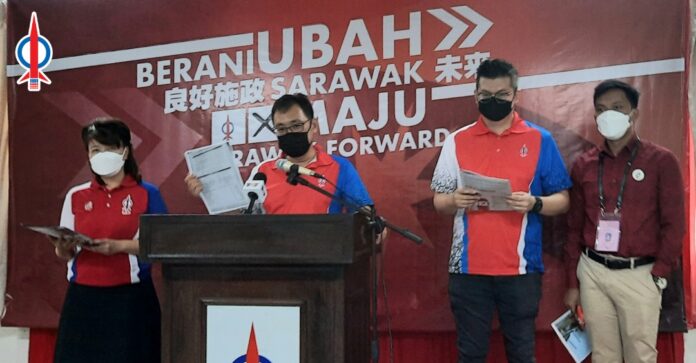 Notwithstanding the RM330 million allocation that Dr Sim has claimed to have fought for Batu Kawah from 2016 to 2021, there are 5 major problems faced daily by the people in Batu Kawah that he has failed to addressed, namely:

The problem with Dr Sim’s performance is that the items quoted by him in his “Report Card” are superficial projects which are aimed at image-building and propaganda for Dr Sim but failed to address the root of the problem faced by the people in Batu Kawah in particular and in Sarawak in general.

Take for example, Dr Sim is the Minister for Local Government and Housing. Yet, not a single Government flats or low or medium cost housing estate was built in Batu Kawah area in the whole of his 5-year term. As a Minister for Housing, for the whole 5-year term, all he could do for housing in the Batu Kawah area was to spend RM3 million to repair dilapidated houses and RM562,000 for maintenance of RPR Tondong flats.

When the Minister for Housing failed to build new flats or low or medium cost houses, people are forced to buy houses built by private developer which are now becoming non-affordable for normal medium and low wage earners.

The second example of his failure as a minister as disclosed in his report card is the fact that he spent the allocation of RM34 million in the last 5 years in road maintenance and upgrade. While the residents of Batu Kawah suffer heavy traffic jam problem, is that the best that a Minister for local Government can do?

Road upgrading and maintenance is the job of the council, no a minister. The Minister for Local Government’s job is that of town planning. Yet, for the whole 5-year term, he could not even start on any project to ease the heavy jam along Jalan Batu Kawa.

The problem lies in the fact that Dr. Sim, as a minister, is doing the job of the council and not doing the job of a minister and worst of all, he is proud of that. That is why notwithstanding RM330 million allocation for Batu Kawah as claimed by him, the 5 major problems of the people are not addressed and resolved.

On the other hand, in Kota Sentosa, in the last 5 years, we have 1 flyover completed and 2 about to complete along Jalan Penrissen. Though traffic jam is a huge problem along that road, but at least the commuters can see light at the end of the tunnel and that end is about a matter of few months’ time.

Sarawak Government’s expenditure for the years 2016 – 2021 are as follows:

Divide this figure by the 82 constituencies, every constituency would be getting RM523 million. Yet, despite Dr Sim’s proud claim about being able to fight for more allocation, his report card only shows that he got RM330 million for Batu Kawah, which is RM193 million under par.