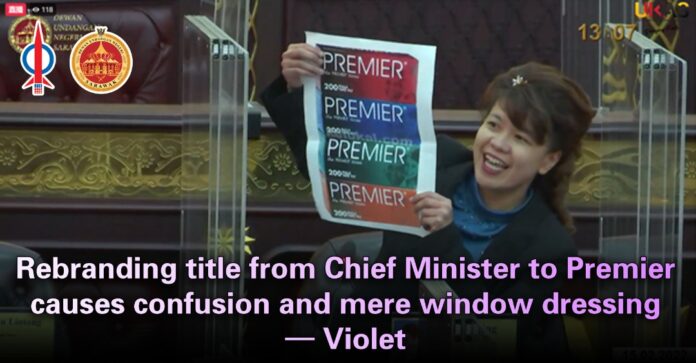 Violet’s Debate – Constitution of the State of Sarawak (Amendment) Bill, 2022

Thank you for allowing me to participate in the debate of the Constitution of the State of Sarawak (Amendment) Bill, 2022.

In the explanatory statement of the bill, this bill seeks to provide for the amendment to the Constitution of the State of Sarawak in respect of matters relating to designation and style of the members Majlis Mesyuarat Kerajaan Negeri, Assistant Ministers and definition of the Federation.

When I first read the word “Premier” in this amendment bill, the first thing that comes to my mind is the brand of a Tissue Paper, because I always buy this brand from the Supermarket. Have you seen this brand before? Usually, a packet contains 4 boxes of tissue papers. It is a registered Trademark, no play play. The other things which I could relate the word Premier to is the bank’s Premier Credit Card or the name of a place in Kuching like Premier 101.

Unlike the words Chief Minister, when we read it, we know it refers to a head of government, a person and nothing else.

Of course, in political sense, Premier is a title for the head of government.

So obviously, given the choice of word “Premier” we opt to use, GPS government is still recognising Sarawak as a state and not a territory and that’s why we opt for the term Premier to replace Chief Minister, is it not? Why is it so? If we want to follow the style of Australia in addressing their head of executive governments, then head of the executive head of a territory should be called the Chief Minister. Because of this, I would not agree to the amendment to change the title of Chief Minister to Premier if we see Sarawak as one of the 3 regions or territories. Jangan Buat Buat Pandai lah. Jangan Shiok Sendiri ya. By the way, I would like to point this out, in Sarawak we may call the Honourable Member for Gedong as the Premier of Sarawak but in West Malaysia, he will still be addressed as the Chief Minister of Sarawak, no one will address him as Premier of Sarawak because such a title is not recognised under the Federal Constitution. Sarawak is good at producing jaguh kampung. It just doesn’t make sense to me if such a title is not recognised under the Federal Constitution, why is the GPS Government insists to rebrand the position?

May the Minister enlighten this august house what are benefits that this rebranding of position will bring to the people of Sarawak? What is the real intent of the change of title name and why is it important for us to go for the change? What differences would it make if we have Premier of Sarawak instead of Chief Minister of Sarawak? What are the things that Sarawak can achieve if we pass this bill? What power does Premier of Sarawak has over Putrajaya ministries, departments and agencies operating in Sarawak? If this amendment bill does not bring any good or real change to Sarawak, it will be pointless for us to replace the title name of the Chief Minister and Assistant Ministers. This Dun should not be treated as a rubber stamp to pass this bill for the sake of mere window dressing or use it as a cosmetic approach to shiok someone, to satisfy someone’s ego in the GPS government.

Instead of doing meaningless change that will lead to unnecessary wastage of public resources, the Chief Minister, Ministers, Assistant Ministers and all of us here in this DUN should place our resources and time on serious business that will bring about real change and reforms to Sarawak, which include:-

1) All state Government-linked Companies (GLCs) including the Development Bank of Sarawak (DBOS) and Petroleum Sarawak Berhad (Petros) which billions of Ringgit at their disposal to report directly to DUN to ensure there is accountability and proper checks and balances;

2) The Sarawak Public Accounts Committee (PAC) must be chaired by an opposition member from this DUN so that the person can scrutinise any financial irregularities in either the state departments, state agencies or state GLCs without any fear or favour;

3) Establish more Select Committees in Dun and be given enough resources and manpower to shadow each of the ministries in Sarawak and operate as entities to check and balance each ministries. These committees should be chaired by Aduns from both side of the house to allow better transparency and accountability and fully utilise all Aduns to be involved in policy discussions.

4) Provide equal allocations to all state constituencies including seats held by opposition like Pending, Padungan, Batu Lintang etc to ensure that no Sarawakians are left behind and are not punished for their democratic choice of vote. Presently, we in the opposition do not receive a single allocation from the GPS State Government.

5) Revamp the delivery system in the state government ministries, department and agencies so that peoples’ issues can be solved within the shortest time span. We do not have to look far, just look at BKSS 7.0 which was announced by YAB Chief Minister sometime in August, 2021, the money which was supposed to be paid out in September, 2021 and December, 2022 has been dragged on until today. The whole process is taking way too much time and I verily believe it could be improved if the Premier of Sarawak which is also the Minister in charged is serious to bring about policy change in the delivery system.

Given that Sarawak has now gain it’s so-called equal partner status within Malaysia though recent amendments to Clause (2) of Article 1 and Clause (2) of Article 160 of the Federal Constitutions in Parliament, and GPS has boasted so much that Sarawak is not one of the 13 states but one of the a3 regions, may I ask why are we still maintaining the words “Majlis Mesyuarat Kerajaan Negeri” and does not propose any replacement for it? Why are we not replacing it with Majlis Mesyuarat Kerajaan Sarawak? Why change alang alang? Why do we still keep this term negeri if Sarawak is truly no longer a state? Just to side track a bit, Mr Speaker, do you know that when we issue cheque to pay Sarawak

Government, take for example issue a cheque to pay the land premium, if the cheque is issued in the name of Sarawak Government, it will not be accepted by the land and survey department. The land and survey department insists that the cheque must be issued in the name of Kerajaan Negeri Sarawak. I am puzzled. If Sarawak is not state, why must be write the word Negeri in the cheque??? Why can’t we just write Kerajaan Sarawak or Sarawak Government? I hope that the Minister concerned could give an answer to this matter.

May I refer Mr Speaker to page 4 of this Bill, below the Explanatory Statement, it’s about Financial Implications and it is stated that “This Bill will not involve the Government in extra financial expenditure”.

I would like to ask the GPS government, how could it be possible that this Bill will not involve the Government in extra financial expenditure??

We all know when this bill is passed and because of the title change in the Chief Minister of Sarawak to Premier of Sarawak and the Assistant Minister to Deputy Minister, bearing in mind, we have 26 Assistant Ministers and all of the letter head, name cards, web site, signboards at offices, car plate of the Chief Minister etc will require immediate change right? Definitely, substantial amount of money will be spent by the state government to do the reprinting of all these items. In addition, there will be courier charges to be incurred to send notices to inform the relevant ministries, department and agencies in Sarawak and all other states of the changes. As such, this bill will definitely involve the State Government in extra financial expenditure.

In the meantime, the people would be very much interested in who will get the printing contracts of the letter heads, name cards and signboards at offices. I hope that the Minister could enlighten this August House on this.

We cannot have an amendment bill which contains an untrue statement that misled this August House.

For this amendment bill, I am afraid I am unable to support.​