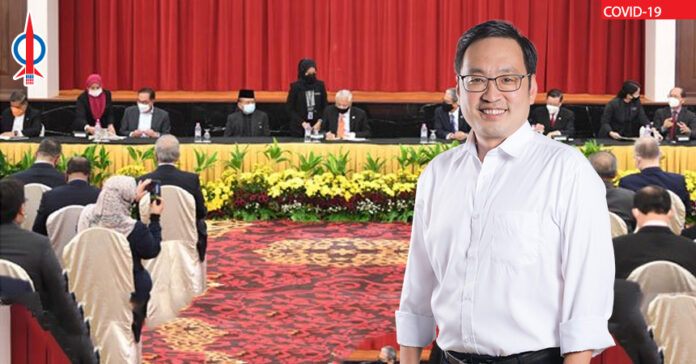 The signing of the Memorandum of Understanding on Confidence Supply Reform Arrangement (CSRA) between the Government and the Pakatan Harapan parties yesterday is an important milestone in the political development of Malaysia, a big step towards a more mature democracy in Malaysia.

It laid down some important reforms that is badly needed for our parliamentary system:

The passing of the Anti-hopping law will spell the end for the political frogs and the days of these political opportunists will be over once such law is introduced and passed.

For the Covid-19 management, I am also glad that the Government accepts the proposals of the PH, namely:

For Sabah and Sarawak, it is also in our CSRA that the Government must step up on the implementation of MA63 which during the PH’s time, the cabinet committee has finalised the report and its implementation direction but when PN took over the Federal Government, everything was put on hold and the report was even classified under Official Secret Act (OSA), keeping the public in the dark.

All these proposed reforms will not be possible if the government has a strong majority in the House. In a way, it was the sheer number of the Opposition in the House that has forced the Government to come to the negotiation table and finally agreeing on the CSRA.

Whatever the reasons for the SCRA may be, the signing of the CSRA is definitely an important and positive development in our parliamentary system. With the introduction of the RM45 billion injection, moratorium on bank repayment and enhancement of the COVID-combat strategy, it will definitely bring greater benefit to the people.

In fact, this road to a more mature democracy started on 9-5-2018 when the then all-powerful Barisan Nasional was toppled in GE-14 by the PH. Though the PH government lasted only 22 months, but the foundation for change of government was then laid down. After the betrayal in the Sharaton Move that toppled PH Government, the then PN Government under Muyhiddin was not a stable one, with many parties and factions fighting amongst itself. Ismail Shabri inherited the same problem. As such, he needs this CSRA more than anyone else. As for the Opposition, we can, through CSRA, effectively play our role in and influence the shaping of the policies of the Government of the day.

One thing that I need to point out is that, under the CSRA setting, the PH will continue to be the Opposition and continue to criticise the Government on the Government policies, but the Prime Minister will be allowed to govern until the next General Elections when the electorates will decide who shall be the government for the next 5 years.

I believe, the future political landscape in Malaysia will continue with no one single party or one single coalition be able to have an absolute majority and dominate in the years to come. The old BN supremacy era is gone. Therefore, CSRA will be the stabilising factor for the future governments, quoting the words of His Majesty, “Winner does not win all, and loser does not lose all”. The PN, BN and PH can fight it out during the Elections, but after the Elections, all will need to put aside the political differences and play their respective different role in the new CSRA settings.

Ultimately, it is the people and the country who will benefit from such a new CSRA setting and political development which is the hallmark of a mature parliamentary democracy.