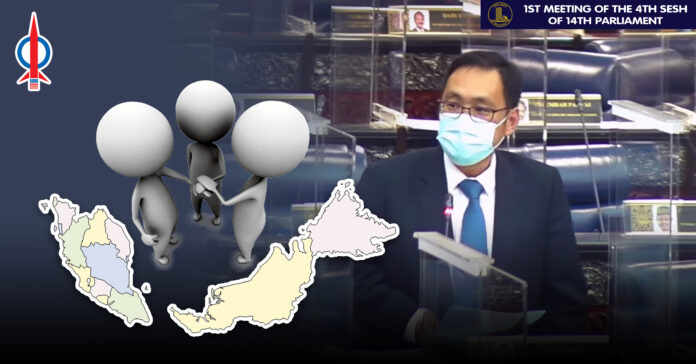 Last week, the Pakatan Harapan and the Federal Government have just signed the MOU for Transformation and Political Stability and a few days ago, we celebrated the 58th Malaysia Day on 16th September.

As my colleagues have spoken much on the other terms of the MOU and the economic recovery plans for the country, and that I only have 10 minutes for my debate, I will only focus my debate on the 5th item in the Annexure to the MOU ie. the implementation of the matters under the Malaysia Agreement 1963.

After 58 years of the formation of Malaysia, we would expect a more united country where the people from both East and West Malaysia would be talking about common prosperity and nation building. But, sadly, that is not the case.

Not only is there more racial divide amongst Malaysian, thanks to the constant playing up of racial and religious issues by UMNO and PAS, there is also more divide between the East and the West. There are more Sarawakians now talking about Independence of Sarawak, secession of Sarawak from Malaysia.

One of the key factors that leads to this sentiment of independence of Sarawak is the unfair and lopsided development between West Malaysia and Sarawak, so much so that many Sarawakians felt that on 16th September, 1963, we have moved from being a colony of the British Government to a colony of the Malayan Government.

The fact that Sarawakians remain one of the poorest people in the country also does not help. The statistics released by DOSM shows that the medium Household disposable income for Sarawak in the year 2019 was only RM3,994 while the medium household disposable income for the country was RM5,116. It shows that the average household income of Sarawakians is well below par as compared to the nation’s average household income.

Of course, the Federal Government is responsible for this imbalanced situation, but the Sarawak’s GPS Government, who before this, was the Sarawak BN, who have governed the State for the past 58 years uninterrupted, are also to be blamed, more so, while the State Government has chalked up a reserve of RM26 billion while keeping the common Sarawakians poor and with income below our national standard. To deflect their responsibility of making Sarawakians poor, the GPS leaders have constantly put the blame solely on the Federal Government.

To address this issue of imbalanced economic development between the region, for the RM45 billion addition injection into the economy as proposed by PH in the MOU, there should be a greater proportion to be allocated to help the people and the businesses in Sarawak.

During the 22 months of PH government, we have increased the proportion of the national development allocation for Sarawak, I hope that this trend will be continued by the current government.

As for the past Covid-19 economy stimulus packages that has been announced and allocated since March 2020, I also call upon the Ministers in their reply to provide a breakdown in the figures and proportions allocated for Sarawak.

The second key factor that leads to this rise in the secession sentiment amongst Sarawakians is the fear how the Federal Government is handling the religious matter.

Lately, there was this proposal by the PAS deputy minister of religious affairs in the Prime Minister’s Department announcing that the Government is working on 4 Syariah laws which include the restriction on the propagation of non-Islamic religion.

The Association of Churches in Sarawak (ACS) has responded by saying:

“As Malaysians come together to celebrate our 58th Malaysia Day, ACS considers such or any future attempts to introduce Shariah Bills affecting non-Muslim religions, as directly contravening the very spirit of the formation of Malaysia where Sarawak, Sabah and Malaya are equal partners.”
Article VII of the Malaysia Agreement provides as follows:

“The Government of the Federation of Malaya, North Borneo and Sarawak will take such legislative, executive or other action as may be required to implement the assurances, undertakings and recommendations contained in Chapter 3 of, and Annexes A and B to, the Report of the Inter-Governmental Committee signed on 27th February, 1963 in so far as they are not implemented by express provision of the Constitution of Malaysia.

The first item in Chapter 3 of the Inter-Governmental Committee is the guaranteed rights to religious freedom in the Federation.

This move by the PAS deputy minister, endorsed by the Prime Minister, is one seen as shaking the very foundation for the formation of Malaysia. Some have even labelled it as a move to make Malaysia a Taliban state. That is not surprising coming from PAS as we have a PAS leader congratulating the Taliban for having regained control of Afghanistan.

We formed Malaysia in 1963 as a secular state with Islam as the official religion of the country. We Sarawak did not join to form Malaysia to become a Taliban state. If the Federal Government, with PAS as a partner and GPS giving its full support, is minded to proceed along with the PAS’ agenda of making Malaysia an Islamic State or even a Taliban country, there is every justification for Sarawak to secede from the country as it has destroyed the very foundation of the formation of Malaysia.

In conclusion, I wish to say that all of us want Malaysia to progress with “common prosperity” not only amongst all races but also amongst the different regions, the East and the West. There are also things that we Sarawakians hold dearly to our hearts and amongst them is the freedom of religion. I therefore urge the Government not to overstep these boundaries and limits so as not to cause the further divide amongst the people and the breakup of the nation.

GPS Asked to Explain Why the High Figures in Covid