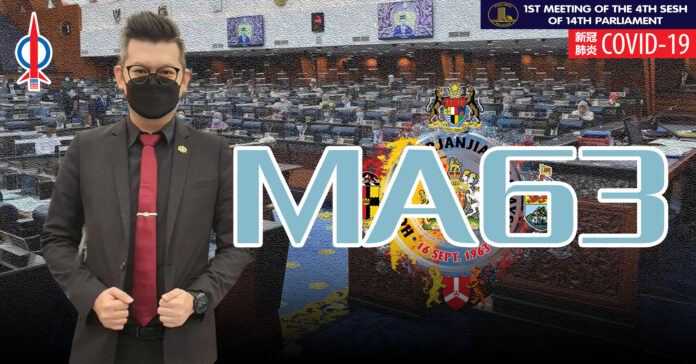 In my Parliamentary debate, i touched on the importance of Ma63, and as a Sarawakian i want to see how the government of the day takes tangible steps to make sure our rights are restored and better protected.

While i welcome that one of the important clause in the recently signed MOU is on MA63, but again we want to see what the government will do, NOT JUST put on paper and DELAY any further need for proper implementation.

The current Law Minister is a Sarawakian and he even said one of his 100days KPI will be on MA63.

That is why i suggested, that if the government is really sincere, the first thing this current government can do is to de-classify the current MA63 Special Cabinet Committee Report done under PH and remove it from OSA.

Under PH, 17 out of 21 items were agreed upon by all stakeholders including the government of Sabah & Sarawak, and was ready to be implemented. But somehow the PN government decided to put it under the Official Secrets Act(OSA).

For me this makes no sense, as this involves our rights and is of huge public interest. That is why i urge the government, the FIRST and EASIEST step they can take if they are sincere, is to remove that report from OSA.

That actually can be done TODAY itself, or even tomorrow. I also demanded the report card from the Ministry of Sabah & Sarawak Affairs for the past 1.5 years. For them, it is noy a matter of 100days KPI but what they have done all this while.