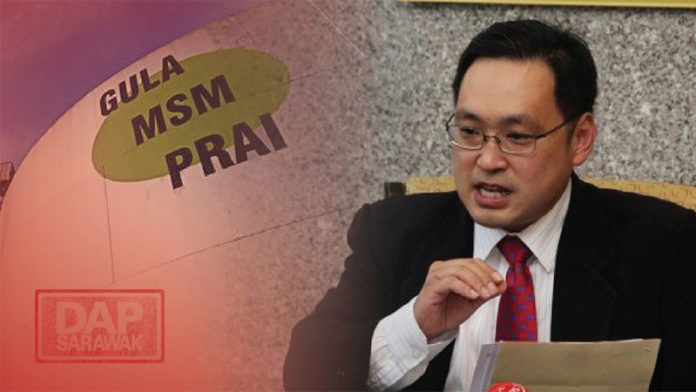 All these years, Sarawak food and beverage (F & B) manufacturers have been at the mercy of the two local sugar refineries namely, MSM Malaysia Holdings Bhd (MSM) and Central Sugar Refinery Sdn Bhd (CSR).

Such huge differential price cries foul of exploitation and discrimination against the Sarawak F & B manufacturing sector.

With the ministry’s new policy to allow the Sarawak F & B manufacturers to import sugar from overseas, they are now getting their sugar supply from Thailand at the price of RM1.70 per kg. (inclusive of transport charges).

Meanwhile, for the benefits of the 2 refiners, for the time being, the Ministry is only implementing partial liberalisation policy, ie. allowing only the F & B manufacturers to apply for the import of sugars for their own use and only allow import of 60% of their usage volume.

It is hoped that with such initiatives, the 2 refiners will henceforth act more fairly towards the F & B sectors by lowering their supply prices, not only for the Sarawak players but also for the players throughout Malaysia.

It is true that the 2 refiners do not receive any subsidy from the government.

However, with the protectionism policies that they enjoy and the inflated prices of sugar that they are selling, in fact all Malaysiansare “subsidizing” them.

On the allegation of MSM that the issuance of Import AP for the Sarawak F & B manufacturers will adversely affect MSM’s performance, I wish to remind MSM of its poor performance for the past 2 years. The APs has just been issued. Yet, MSM’s share prices listed in KLSE has plummeted since 2017.

The following is the chart of MSM’s share prices trading at KLSE for the past 2 years. In the last two years, before the alleged granting of import APs to the 8 manufacturers in Sarawak, MSM’s share prices have gone down from RM5.00 to the present RM1.43 (more than 70%).

Ironically, in the last two years, international raw sugar prices was only in the region of USD 0.30 per kg. With such low prices of raw sugar and the high prices of refined sugar that MSM was selling within Malaysia, MSM should be making windfall gains. Yet, MSM, as reflected in its share prices, has performed terribly in the last 2 years.

So don’t use the new liberalisation policy as the excuse for your poor performance.

Under the new Pakatan Harapan Government there is no justification to maintain the monopoly policy created by the previous government, more so when the company having the monopoly power continues to make losses despite charging the Rakyat high prices.

Meanwhile, since the press statement by MSM that it might close down some of its loss-making sugar refinery plants, I have received calls from several prospective investors willing to take-over the plants. I invite MSM to promptly come forth to the Ministry so that we can arrange for the meet up between MSM and the prospective investors.