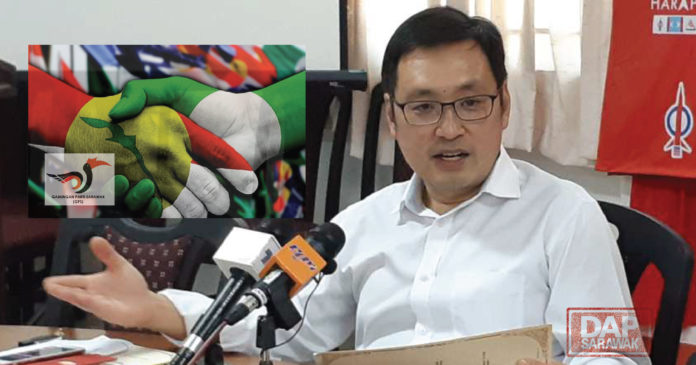 The GPS’s latest statement that GPS is not in the UMNO PAS coalition but friendly to it is as lame an excuse as one can get. It is just a hopeless attempt by GPS to try to disassociate itself from PAS and UMNO.

However, history will record that Muhyiddin’s UMNO PAS coalition managed to get the 114 out of 222 MPs’ votes to form the Government and among that 114 votes, GPS contributed 18. Without the 18 votes from GPS, Muhyiddin will only have 96 MPs supporting him which fell far short of the 112 number to form the Federal Government.

For decades, PAS has tried all ways to be part of the Federal Government but to no avail. Finally, it is with GPS’s blessing and support that puts PAS in the Federal Government, empowering PAS to impart its ideology and policies in our national policies and federal laws. As part of the Federation of Malaysia, Sarawak will not be spared these national policies and federal laws.

It is with the intention to avoid such undesirable consequences to our nation that DAP Sarawak agreed to make a concession to GPS, including not contesting in certain seats in the coming State Elections. We foresee that the UMNO PAS coalition is not in the best interest of the nation and will also not work to the benefits of Sarawak. Yet, our goodwill was met with scorn and ridicule by the GPS who prefers to work with PAS and UMNO.

Now that Muhyiddin has been sworn in as the Prime Minister of Malaysia, GPS’ Members of Parliament will enjoy the comfort of being the Government back-benchers. However, the GPS’ State Assemblymen and women will find it difficult to face the people of Sarawak, especially given that the State Elections is just around the corner and Abang Jo has on several occasions indicated that it will be held soon.

I believe most Sarawakians felt a sense of shock and betrayal about the decision of GPS to support PAS and UMNO as the Federal Government. In the 14th General Elections, Sarawakians rejected the UMNO, yet, it is GPS now who brought UMNO back to power. That is surely not the way to defend Sarawak’s rights.