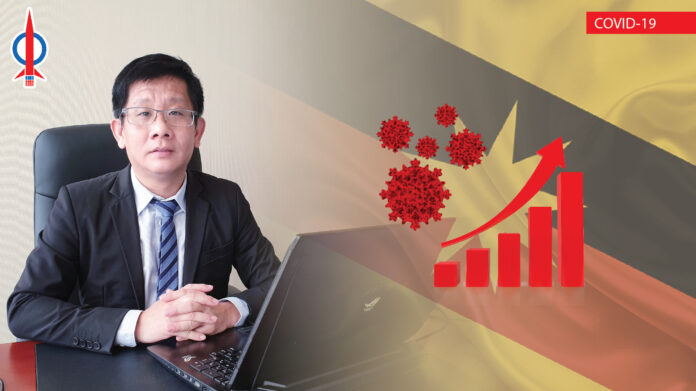 It is said that strict SOP will be imposed; however, this is still a concern to many of us on the ground, especially with the severe cases of COVID19 in the peninsular.

To put into a better perspective, current daily COVID19 cases are breaching the 2000 mark, doubled the number of cases in just less than two months back. Even during the MCO with the strict measure in place, there are only less than 300 cases daily versus the now 2000 mark. Currently, there are more than 20’000 active cases versus 2’600 active cases peak during the MCO period. The total COVID19 cases in Malaysia now stood at 108’000 and rising rapidly. The only reason why we are not on the strict lock-down is due to economic concerns, and that should not be taken lightly and start to organize a public event.

It is also very counterproductive and contradictory when just not long-ago other state Ministers advised the public not to go about their usual means of house visiting and celebration for Christmas and coming Chinese New Year due to the COVID19 concern. Yet, here we are telling the public that we are having a New Year’s eve count down with 1000 people attending. Furthermore, such an event will be attended by many VVIPs, including politicians that are having quarantine exemptions, of which some could be just coming back from the Red-Zone not long ago.  While strict SOP may be in place during the event, there is no way of telling how the 1000 people are going to interact during the event or outside the main event area; it is simply just 1000 too many. How about the crews and workers preparing for such a big event with 1000 special guests and VVIPs? How many are there? There is simply no easy way of getting the venue prepared while adhering to the 1-meter personal distancing rule and other SOPs.

Yesterday Sarawak recorded four new cases. That itself is enough of concern given that the spread of the virus can be exponential, like the case of Sabah and peninsular. Just because Sarawak is in the single-digit, it does not means that we should be complacent. Some infected persons may just not be detected yet, and around 89% of Covid-19 patients in Malaysia are asymptomatic or show mild symptoms.

The Sarawak Government also needs to be reminded that all around the globe, people are battle with new strains of COVID19. Such is the case of Sabah, which started the new wave, the D614G strain was found to be 10 times more infectious than the strain currently circulating. The virus is continuously evolving, and we may inevitably open the door for the virus to take a foothold in Sarawak. The risk is just too much to take in.

We all can agree on appreciating the front liners who have been looking after us relentlessly. Let us not put in vain their effort in keeping us safe by not risking the spread of the virus. Instead of inviting them to the event, perhaps a good rest and financial reward are the best way to thank them and ease their burden during such a trying time.  Calling them ‘Smartass’ is definitely not one of them.