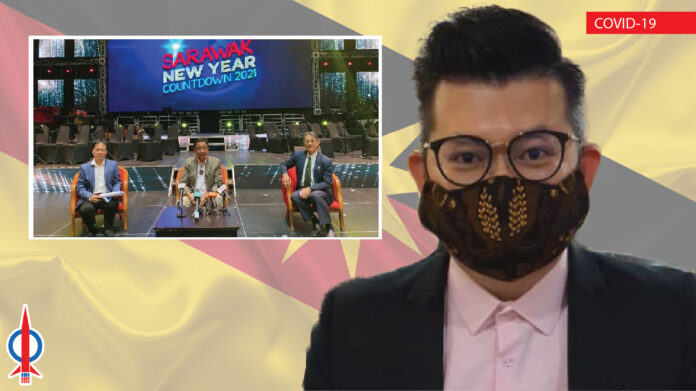 I urge the Sarawak State Government to consider postponing their planned New Year Eve Celebration which is said to gather at least 1000 people tomorrow.

This event is said to featured different artist who some of them flew in from Kuala Lumpur(KL) just for the event. Yesterday we read the news that an artist was given special exemption and pass to enter Sarawak without the need for quarantine even though she just came from a Covid-19 Red Zone.

And when probably some civil servants in the Sarawak Disaster Management(SDMC) tried to follow the necessary SOP for her, the State’s tourism, arts and culture minister YB Abdul Karim Rahman Hamzah calling a called them “Smart ass” for merely trying to do their work.

The Minister further claimed that he had managed to get the clearance to enter the state from State Disaster Management Committee (SDMC) chairman Datuk Amar Douglas Uggah Embas for the artist.

This raised few questions on why there seem to be double standards in the treatment for normal folks coming into the State and some VVIPs. Is a New Year Party now considered as “essential services” that warrants such special exemptions and treatment? On top of that, these exemptions were granted to people coming from Red Zones where numbers in the Klang Valley are continuously climbing. Why such double standards?

Here we see that the main issue is not the artist who merely received an invitation to perform, nor is it the problem with the civil servants who is just trying to do their job, but rather the person or Ministry who thinks it is a good idea to organise a 1000 people, indoor new year countdown party in the middle of a pandemic and give exemption for a person travelling from a Red Zone.

Even if they claim to be able to maintain certain clear SOPs in the event, what message is the State Government trying to send to the people about the importance of following all necessary precautions including avoiding crowded areas, risking the possibility of an outbreak. The Senior Defence Minister and head of Majlis Keselamatan Negara (MKN) YB Ismail Sabri yesterday mentioned that there will be no Mass Gathering for the New Year for the whole nation.

How is then Sarawak exempted?

At the end of the day, the question has to be asked whether such big event is necessary or not? I rather the money spent on the event be used to help those who really need it including showing appreciation to our front liners.

And I believe YB Abdul Karim should also extend his apologies to the civil servants for labelling them names for merely doing their job. For me it is an insult to all the hard-working front liners out there who on a daily basis put their lives at risk just so that we are cared for and protected.