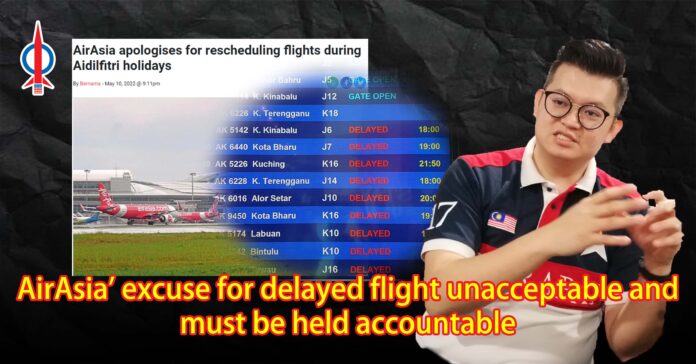 The excuses given by AirAsia for the frequent and constant delays and rescheduling of domestic flight that has caused all kinds of inconvenience and even economic loss to the public, especially during this festive season is unacceptable and MAVCOM should hold them accountable to this to protect the rights of consumers.

AirAsia released a statement apologising for the problem and giving the excuse that they have insufficient aircrafts as may needed necessary repairs and maintenance after not being used for a long time especially during the MCO period.

The delay is also due to the long waiting queue for aircraft maintenance facilities for Malaysia and the region and these aircraft that are flying must be repaired before they can be flown again.

While safety and security of the planes and passengers are of utmost importance, the company should have anticipated this and if they are aware that they have insufficient planes they should not have opened up for all those tickets to be sold to the public.

If they knowingly know they cannot meet the demand, they should not have allowed the tickets to be sold which end up causing so much inconvenience, delay, and even economic loss to the public.

In my view, for consumers, it can be interpreted as a form of “misrepresentation” if they purchase a certain flight at a certain time, but yet gets rescheduled to a different time.

I receive complaints on how a customer booked the ticket online and within few hour i received an SMS informed him that his flight had been re-schedule. Mind you the flight is in 2 weeks time and they already know it will be delay since even with 2 more week to go.

If they can foresee the problem, why sell those tickets in the first place? Customers not just suffer loss of that flight but many have other connecting flights with other airlines which had to be changed due to changes in their AirAsia flight schedule.

That is why MAVCOm must hold the airlines accountable to this. Necessary action must be taken and MAVCOM must be more proactive to take action and not allow this to happen as this problem has been happening since April.

I reiterate my call yesterday for quick action on the matter as well as a long-term policy in place to ensure this does not happen and airlines are kept accountable towards their set schedule.

While the government said that there be an investigation, but such investigation such not be an excuse to delay the necessary action. There is no need for lengthy investigation, or even lengthy research into the issue as the flight records and even data are readily available are already there as evidence of constant delays and rescheduling.