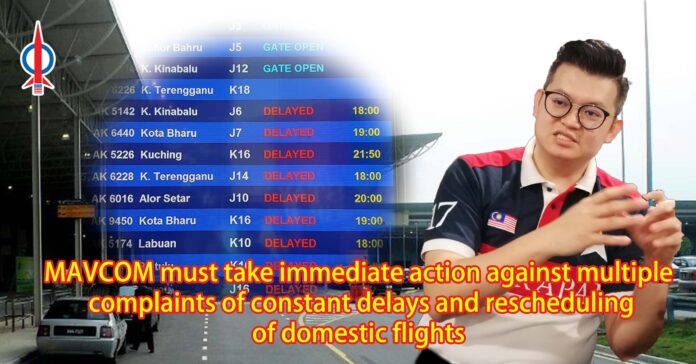 The Ministry of Ministry of Domestic Trade and Consumer Affairs(KPDNHEP) and Ministry of Transpory(MOT) through MAVCOM must be more proactive and take immediate action against the multiple complaints of constant delays and rescheduling of domestic flights not just by AirAsia, but also other airlines including Malaysian Airlines.

MAVCOM and MOT are duty bound to investigate airlines for frequent flight rescheduling and take necessary action to protect  consumers rights including those from Sarawak and Sabah.

This is in response to the recent reported surge of cases during this festive season which has not just cause inconvenience to consumers and public, but also incur economic cost due to consumers daily schedules being affecting due to the changing flight timing.

I have received multiple complaints from the public affected with some being delayed and being stranded in Kuala Lumpur for up to 9-10 hours.

For consumers, it can be interpreted as a form of “misrepresentation” if they purchase a certain flight at a certain time, but yet gets rescheduled to a different time.

While i understand some rescheduling of flights or delays are unavoidable, but there has to be some form of reasonable threshold on number of flights in a certain period of time that can be rescheduled, and it must always be based on a legitimate reasons.

While the Minister Alexander Nanta Linggi did say that they will conduct investigations in the interest of consumers, but i urge for quick action upon the matter as well as a long-term policy in place to ensure this does not happen and airlines are kept accountable towards their set schedule.

Such investigation such not be an excuse to delay the necessary action. There is no need for lengthy investigation, or even lengthy research into the issue as the flight records are already there as evidence of constant delays and rescheduling.

Fact of the matter, this is not a new phenomenon but have been happening for years, yet nothing concrete has been done to keep the airlines accountable to their own timing.

While consumers have the right to claim compensation for continuing their journey but many a times this is subjected to many terms and conditions which is troublesome to consumers.

This compensation also do not cover time lost and indirect economic lost due to the change of schedule.

That is why the Ministry must work together with the Ministry of Transport through MAVCOM to holistically address this issue once and for all.

Instead of just conducting investigations, a clear timeline should be set on when action will be taken and a comprehensive policy on addressing this issue including keeping the airlines company accountable.

They must be pro-active to properly address this issue holistically and to properly protect the rights of the consumers and also to indirectly promote better economic growth through more efficient travels.

Explain the effectiveness and utilisation rate of Raspberry Pi in Sarawak