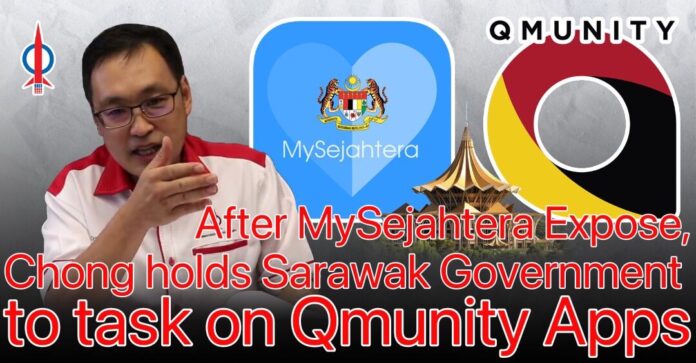 With the recent MySejahtera Apps scandal revealed, the Sarawak Government must also give an account for the Qmunity Apps.

The Qmunity Apps was launched by the Sarawak Government amidst the Covid-19 pandemic when the MySejahtera Apps has already been widely used in the country. After a few months of its introduction, it somehow faded into oblivion.

Questions that must be asked of the Sarawak Government of the Qmunity Apps are:

On the MySejahtera Apps scandal, credit must be given to the Parliament’s Public Accounts Committee (PAC). The PAC summoned Minister and high officers of MOH for enquiry. The scandal involves privacy breach issue, national security compromised issue in that the MySejahtera is owned by foreigners and also hundreds of million Ringgit of public fund.

The chairman of the PAC who initiated the enquiry on MySejahtera is DAP’s Member of Parliament for Ipoh Timor YB Wong Kah Woh.

Since Pakatan Harapan took over Putrajaya in 2018, one of the key parliamentary reforms introduced by the PH Government was the appointment of an Opposition Member of Parliament to chair the PAC. With that, the Opposition MP can then set the agenda of the PAC, holding enquiries on any project or procurement of the Government and summoning the Ministers and Secretary-General of ministries to give explanation before the PAC.

This could never happen before 2018 when the PAC was helmed by a Government MP.

Had it not been an Opposition MP chairing the PAC, the MySejahtera scandal will continue to be swept under the carpet. Such reform set by the PH Government will provide more check and balance in the system and safeguards on our public fund.

In Sarawak, the Sarawak DUN’s PAC has always been and is still chaired by a GPS Government ADUN. This is the same scenario as the pre-2018 Federal Parliament. When the national parliamentary democracy is progressing towards more transparency and accountability, the Sarawak DUN should not remain in its non-transparent and non-accountable modus operandi.

The Sarawak Government is not only keeping Sarawakians in the dark on the Qmunity Apps issue.

There are a lot of other issues that we Sarawakians are kept in the dark by the Sarawak Government, eg. the depletion of capital in Amanah Saham Sarawak (ASSAR), the procurement process of the hydrogen buses, the construction of the Baleh dams, the multi-billion acquisition of Bakun Dam, the investments and return of DBOS, the operation of LPG gas distribution rights, the proposed implementation of Autonomous Rail Transit (ART), the procurement process of the 300 telco-towers, etc.

All these issues involve billions of Sarawakians’ public fund, but the Sarawak DUN PAC seems dysfunctional and disinterested. That is because the chairman of the Sarawak DUN PAC is a GPS ADUN and must toe the line of the GPS Government. It defeats the whole purpose of a parliamentary PAC.

DAP Sarawak to discuss working with other Opposition parties this Tuesday