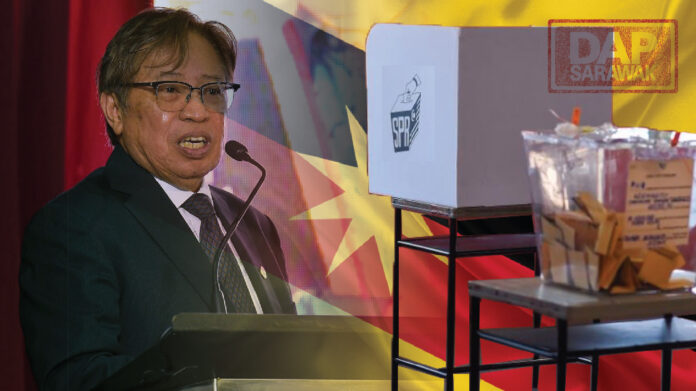 Abang Jo should stop holding the people of Sarawak to ransom by threatening that if GPS fails to retain power after the next State Elections, certain allocations and projects will be terminated. Such “development” as bait for votes is not something that befits a true political leader.

Yesterday, Abang Jo was reported as saying in Kapit that the Government will allocate RM1.5 billion for Upper Rejang Development Authority after the State Elections if GPS continues to be the Government.

The short answers to Abang Jo’s statement are:

I can assure the people of Sarawak and the business sector that if Pakatan Harapan Sarawak takes over the State Government after the Sarawak Elections, it will continue with the development projects and programs of the current government, albeit with some pertinent improvements to be made, namely:

In fact, when PH took over the federal government in 2018, the Pan Borneo Highway project continues, but we took out the middle-man, LBU thereby saving government fund of RM3.1 billion which was re-directed back to Sarawak for other development. Without the 22-month PH government, LBU would have pocketed the RM3.1 billion fund and the people of Sarawak will not receive the benefit of the said RM3.1 billion.

Likewise, for the few coastal highway bridges that costs hundreds of millions and one even exceeded RM1 billion, they were put on hold because the Ministry of Finance insisted on open tender for the selection of contractors to undertake the projects. The Sarawak Government had other ideas about the implementation of the projects. Now that the Perikatan Nasional has taken over the federal government, few of the bridge projects have thus been awarded without any open-tender process.

For the repair of the dilapidated schools in Sarawak, the fund was also allocated by the Federal Government. But when it was to be implemented by the State, the costs of repairing one school was approximately to RM10 million per school with less than 200 students. The costing presented by the State was way too high and thus reviews were necessary.

The case of the Jepak Holding’s electrification of rural school project is a classic example of huge funding for schools but went into the pockets of few individuals. RM1.25 billion of allocation was supposed to provide solar hybrid power to 369 schools in Sarawak. At the end of the day, the money was spent but none of the schools got their solar hybrid system. The case is now on trial involving the wife of the ex-Prime Minister Najib.

Surely, the PH Minister of Finance Lim Guan Eng will not allow such similar corruption to happen under the PH Government. As such, the repair of dilapidated school projects was handled with very stringent terms and conditions. This made the GPS ministers very unhappy with Lim Guan Eng and DAP.

One of the projects that, if PH takes over the State government, the PH Government will stop is the ART project, but we will replace it with much better, consistent, punctual and wider coverage area public bus system with no fees for users for the first 5 years.

Instead of 5 State-owned international schools collecting fees and creating elitist students, we will allocate not more than 10% of the development budget for education, including building and providing free English-medium private schools for Sarawak students. The amount would be enough to build at least 20 schools throughout Sarawak to give parents of all communities in Sarawak a choice to send their children to study in English language learning environment.

Therefore, I urge Abang Jo not to play the “Carrot and Stick” kampong politics as such low tactic does not befits a statesman who is supposed to lead the State of Sarawak.