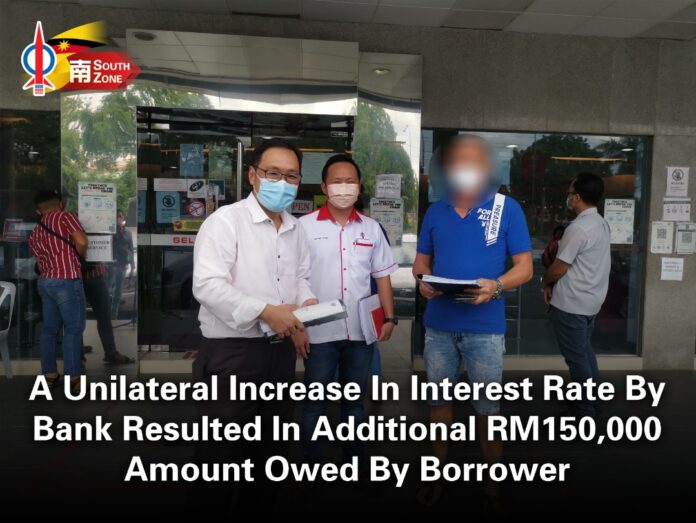 Another borrower having issue with bank unilaterally increasing interest rates on his loan seeks help from me and this morning we visited the Bank’s branch office at Kota Sentosa 7th Mile Bazaar to attempt resolve the matter.

I have helped written to the bank for the cancellation of this additional interest amount and at the same time sought the intervention of Bank Negara Malaysia to ensure that justice be done to Mr. Chuo.

On a general note, Bank Negara Malaysia should set more controls and restrains on banks unilaterally increasing interest rates on the loans of their existing customers. A small variation of 1 – 2 % in interest rates on loan over the term of the loans can result in additional 10 – 15% of the total loan to be repaid. This is shown in Mr. Chuo’s case.

Such practice of unilateral increase in interest rates by banks is rampant in the financial sectors. This is also known as the “hidden costs” which many ordinary folks fall preys to, yet the ordinary people are always at the mercy of big corporations like the banks which have almost unlimited resources.

Therefore, all the more Bank Negara Malaysia must set the rules to help safeguard the interests of the individuals and to balance the inequality in the free market forces.

On our part, we DAP will continue to fend for the ordinary people and fight for their rights and justice.

We also advise all borrowers to regularly check their loan accounts with the banks to ensure that the interest rates charged by the banks are in accordance with the loan agreement and not unilaterally increased by banks.