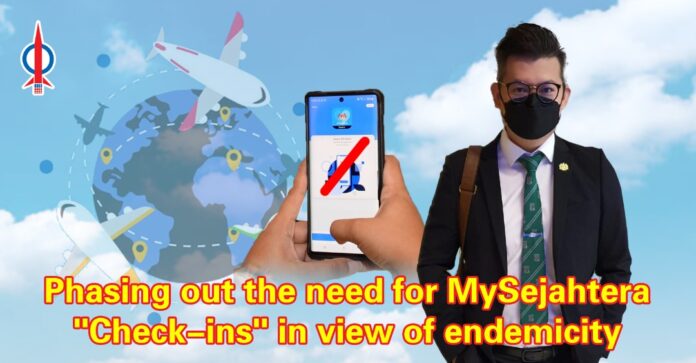 The Federal Government and the Ministry of Health should start phasing out the need for the public to “check-in” on their MySejahtera as we approach endemicity and learn to live with Covid-19 especially in view of government’s plan to open up borders and lessen restrictions when it comes to Covid-19 restrictions.

The main purpose for the “check-in” feature was for contact tracing and it was important then, when our strategy was containment and even mitigation. However now with the SOPs being changed by the Ministry of health where quarantine is no more needed for close contacts and testing strategy is only for the symptomatic, the “check in” function has little epidemiological value.

So, while privacy may be one argument against the need for continuous “surveillance”, but the main issue is the epidemiological value it adds especially when it comes to protocols during endemicity.

Fact of the matter, millions of Malaysians rigorously obliged with the government’s directive to “check-in” with their MySejahtera, many were even fined thousands of ringgit for not doing so, but how many cases were actually detected and the public notified through this supposed “check-in” contact tracing feature under MySejahtera.

So the effectiveness of this function if of course in question and the government should clarify even the statistics and percentage of cases detected through the MySejahtera contact-tracing mechanism.

With this also, it also helps address some of the concerns the public may have when it comes to data privacy and data ownership as such “check-in” or “surveillance” data are no more inputted into the App. With that said the Government must clarify all the concerns being raised and allow all these MySejahtera deals to be investigated through an independent commission to ensure the strictest governance and accountability threshold are applied especially when dealing with such vast amounts of highly sensitive personal data.

This does not mean that MySejahtera do not have a role to play in the future especially when it comes to pandemic management. Such contact tracing features could be upgraded in preparation for future pandemics and only reactivated when time comes to ensure we do not fall behind again in controlling the spread of any infectious disease.

Currently the MySejahtera App can also be converted into a “Green Pass System”. Under the Green Pass system, only those individuals whose status is ‘green’ on the MySejahtera, will be permitted to carry out the allowed activities as stipulated by the government especially when it comes to travel, quarantine duration or proving the validity of your Covid-19 test result in order to gain entry to certain venues as stipulated by the government.

So, all we need to do is flash it to authorities at any entry point to enter rather than scan QR codes. If needed the authorities can scan our QR code at random to verify the authenticity of our vaccination cert or even test result from time to time for monitoring and enforcement activities.

And for that to happen and to better protect the authenticity of such vaccination certificate, it has to be moved to blockchain. There are all kind of allegations that our MySejahtera is easily hacked and the status on MySejahtera can be easily altered and changed. Thst is why a verification mechanism through blockchain is very important which is already used for inter-country vaccine certificate recognition.

So, as we move into endemicity, our strategy must change and the different requirements by government must be backed by data and science and added epidemiological value. That is why I strongly believe, in view of that, the government must phase out the check-in function of MySejahtera and prioritise all the extra millions intending to upgrade the app rather to increase our healthcare system capacity