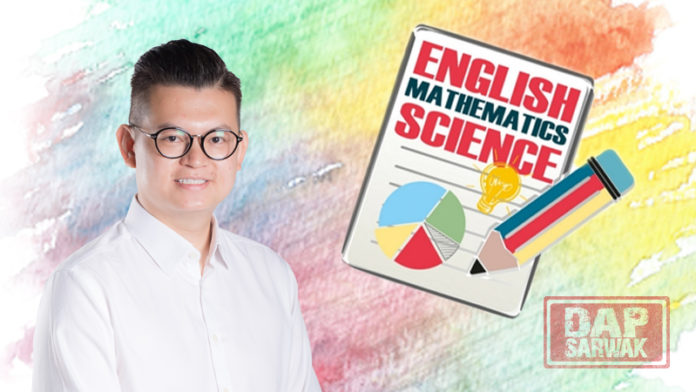 I highly welcome the announcement of Federal Minister of Education YB Dr Maszlee Malik that Sarawak will be the first state in Malaysia to teach Mathematics and Science in English in its primary schools soon. This is a important move to cultivate the learning of English at a younger age on top of empowering our students to master the international language of science and technology to remain competitive in an ever globalised world.

Nowadays, English is one of the most important languages and seems to be the main languages of the world. While considering to compete in the global market, moving along with rapid technological advancement, and meeting changes in societies’ needs, wants and values will therefore demand everyone to have skills and knowledge about English language.

On top of that, it is very befitting that Sarawak is chosen to be the first State for

such implementation as our rights to the usage of English is enshrined under the MA63 agreement on top of it already being the second official language in the State. This also shows the sincerity of the Federal Governments not only just to promote the usage of English in science and math, but also to respect and uphold the rights of Sarawak and even Sabah.

With the promotion of the usage of English language at a younger age, it encourages our students to be bilingual and this helps with their learning abilities. Studies using functional MRIs (imaging studies) of the brain have shown that children who are bilingual at an earlier age use their brain more efficiently as compared to those who acquire those skills as adults.

With the implementation, of course comes with its obstacles especially to ensure it is properly implemented especially the rural areas. This will require not just proper training for the teachers to increase their proficiency, but also to create a surrounding environment to promote the interest and usage of English among the students especially in area of Science and Mathematics.

Efforts also need to be done to cultivate good acceptance by the teachers as well on the matter. If a teacher have a favourable attitude towards the subjects as well as the students, there would be an inclination of having a good participation among the parties involved. Teachers which are able to inculcate their attitude about teaching Mathematic and science in English will also be able to provide a stronger predictive outcome as to its usefulness will therefore look for avenues in making the success of its importance

On top of that, the Ministry should also make sure that sufficient resources and adequate reference books about the subject in English is available for the students and the teachers. While there are much more to be done to make sure the implementation of this policy is done properly and fully benefit the students and also the teachers, but this is a good step forward especially for our students.

On a separate matter, im glad that the Federal and State Government has ironed out certain misunderstanding regarding the RM 1billion contra loan to repair the dilapidated schools in Sarawak. The issue has always been the proper implementation and method of payment, rather than what certain quarters play up as ‘u-turn’ or ‘rejection’. Main consideration has always been for transparent implementation to make sure the schools and students will directly benefit from it.