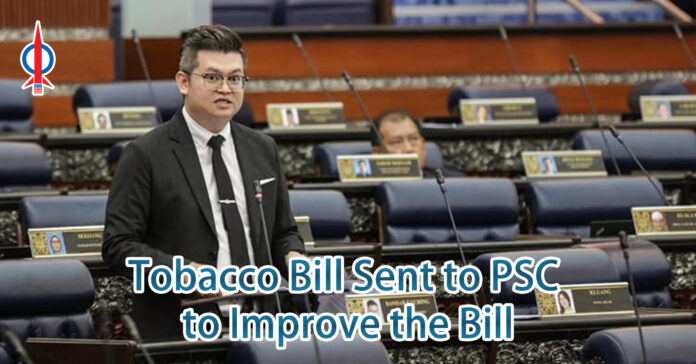 Such legislations which includes new regulations governing both tobacco and vaping, and introduces innovations such as end-generation gaming (GEG) aims to further regulate the use of tobacco products and the vape industry which until now is unregulated and unmonitored, on top of introducing an end game to stop the new generations from picking up such harmful habits.

Such intentions should be supported by all layers of society. We all know the dangers of smoking and its affects is not only on our personal health, but also has effects  on the people around us.

Data from the Center for Disease Control and Prevention (CDC), shows that for every death due to smoking, three individuals will be affected from the brain to the toes and the effects are not specific to the heart or lungs only.

Data from the Malaysian Ministry of Health shows that basically, for every RM1 the government collects through taxes from the tobacco industry, the government has to pay RM4 to treat diseases caused by complications of tobacco use.  Therefore, an estimate that RM5 billion in tax revenue may result in RM20 billion being spent by the government on the cost of treatment for tobacco-related diseases.

That is why in an ideal and utopian world, there is no argument on the importance of this Bill. However we understand in the context of our country, there are real concerns on gaps of implementations, and possible loopholes and over-reaching enforcement powers.

This includes concerns on provisions in the Bill that grants enforcement officers the powers to enter any premises, seize baggage, stop, search and seize conveyance as well powers to search and seize without warrant, including a body search by officers of same gender just at a suspicion of possessing any tobacco products.

This is disproportionate and open to abuse especially when there is inconsistent enforcement from different agencies. That is why the recommendations for the Parliamentary Select Committee of Health, Science & Innovation was to delay the implementation of the GEG, not to simply delay what is good, but in order to prepare a proper enforcement framework to ensure those we want to protect are not victimised by the law. This includes refining the powers of the enforcers.

While in all my engagements with the Ministers, he has been open and progressive in accepting our recommendations including not criminalising possession which in theory, protects user from all those overreaching enforcement powers that we are concerned about when it comes to possession or even suspect of possesion.

A person addicted to nicotine, whether a smoker or vaper, whether in the GEG generation or not, has the right to be treated equally under the law, with compassion, and dignity.

However  it is important to really review all clauses in the Act to ensure it reflects the concessions agreed with the Minister on top of address other concerns that may be in the Bill. That is why in my debate, i proposed to the Minister that it be reviewed extensively by a Special Select Committee to ensure we put safeguards to Bill prevent for abuse while still preserving the spirit of Bill.

This review is not an attempt to further delay the Bill, as the timeline for implementation of the GEG is not affected as it has been agreed to be delayed for 2 years.

What is more important is to make sure we come out with a “good law” and addressed all the concerns to get proper buy-in to increase compliance and ensure it achieves its intended target. I strongly believe the Committee can make a commitment to work on the Bill extensively, and target for it be one of first agenda through agreement of the government in the upcoming Parliament session scheduled in October.

As a member of Parliament it is our responsibility to look at the Bill at all angles. This is not an attempt to simply delay, but more importantly  to ensure we come up with a better Bill to ensure it achieves it target without any unintended consequences.

I am glad the government agreed and we will continue our work to ensure we give life to an “improved Act” that will change our society for the better.