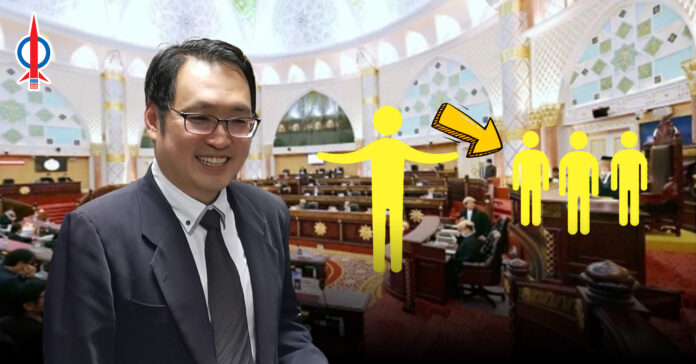 There are 3 things very wrong about the Abang Jo’s new cabinet that all Sarawakians must take note and be concerned about.

With the establishment of DBOS and PETROS which have at their disposal billions of Sarawakians money (including the possible current use of future money), all the more pertinent that these 2 positions must not be held by one person.

In the newly announced cabinet, being the Chief Minister, Abang Jo also holds the minister posts for Finance, New Economy, Natural Resources, Urban Development, Energy and Environmental Sustainability. Each and every of these portfolios involves multi-billion allocations annually and all under the control of one person.

With all these, the Chief minister’s office almost control everything under the State Government.

THIRDLY, an over-bloated cabinet size given the population of Sarawak. Abang Jo’s new cabinet consists of 11 ministers and 26 Assistant Ministers, a humongous 37 members out of a total 82 ADUNs and serving a population of approximately 3 million.

Even the over-sized federal government consisting of 31 ministers and 38 deputy ministers serving a population of 32 million pales in comparison with the size of the Sarawak cabinet.

Is Abang Jo’s cabinet super inefficient (even compared to the federal government) that he needs so many of them to do the job? Or rather that, such appointments were used as rewards to the GPS elected representatives at the expense of public fund?

In the 12th Sarawak Elections, the people have returned the GPS as the Government with a bigger majority of seats in DUN, ie. 76 out of 82 DUN constituencies, literally giving the GPS the absolute and unfettered control and overwhelming voices in DUN. Notwithstanding the huge majority, it should not be taken as an endorsement by the people for Abang Jo to do as he wishes, concentrating all power to himself and wasting the Sarawakians’ money to reward his over-sized cabinet.

Though the DAP has only 2 ADUNs for the following 5 years, we will continue to play our part to provide the check and balance against such abuses.

Mayor, why keeping some KMC units vacant when so many poor need a place to stay