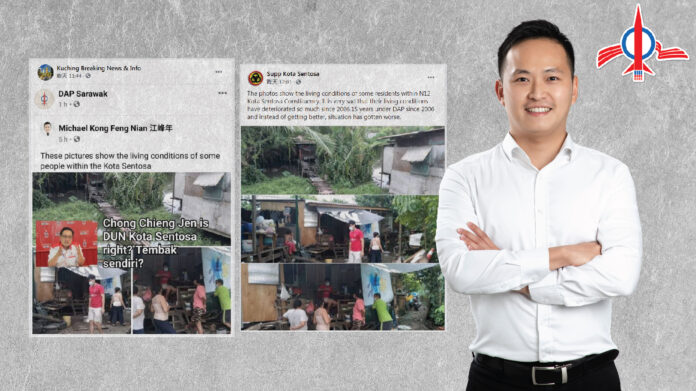 It is utterly disappointing to see in social media how SUPP representatives and their supporters have the cheek to blame DAP’s Chong Chieng Jen for the poor living conditions of some of the residents within the N.12 Kota Sentosa constituency.

To see politicians lack the understanding of the roles of the local authorities and the State Government but instead constantly blame the DAP for not being able to bring development or improve the public infrastructures of the community is baffling. While these Jurassic arguments may hoodwink many in the 70s or 80s, I believe that in today’s society the people are very well informed and can judge for themselves.

With most matters tied to development such as land, roads, drainage and also local councils under GPS, improvements can only be carried out by the State Government. If indeed SUPP was a capable and considerate party, immediate action could have been taken to help these people.

What is more astonishing is that some quarters would argue that they will need to be elected into office in order to resolve these issues. These illogical politicians should realise that issues such as local government and housing fall directly under the jurisdiction of the Ministry of Local Housing and Development which is now being helmed by Sim Kui Hian. With GPS being part of the Federal Government, State Government and local government, SUPP has all the power and authority to make things right.

Despite not being in the government, DAP has over the decades been helping the public in different ways. Without any form of funds or allocation from the State government for opposition-held constituencies (as compare to GPS’ yearly allocation of RM5million per constituency held by GPS), DAP has to resort to an honest way of helping these people i.e. seek public donations or dig into personal savings.

What GPS particularly SUPP should learn from all these years of experience is to perform their duties for the public regardless of their political affiliations and/or party identification. Bring on the much-needed development to the entire Sarawak regardless of whether it is held by GPS or the opposition. The people are sick and tired of the constant threat by GPS and their representatives that development will come only to those who vote for them. This tactic does not work anymore in this day and age.

If SUPP chooses to continue to put the blame on DAP and advance Jurassic arguments, it will not only show how outdated and irrelevant SUPP is but also speaks volumes of their representatives.