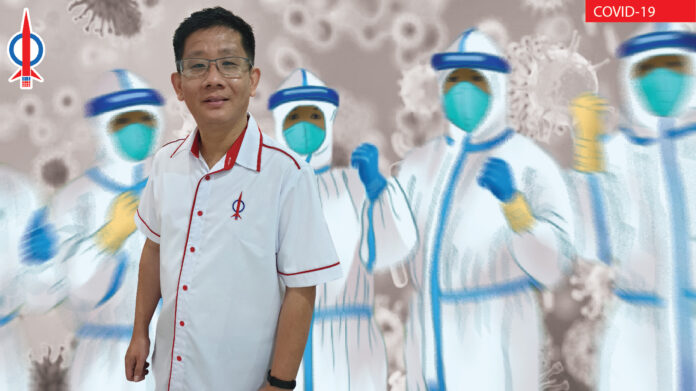 The Sarawak state authority, mainly the State Disaster Management Committee (SDMC), slow decision-making and indecisiveness put fellow Sarawakians at risk. Many started to question the ability of SDMC to make prompt decisions, which appears to be out of sync with the current state of urgency.

Has too much bureaucracy in the state agency become the major stumbling block for the professionals to move forward? The main reason for failed containment of the virus is due to a series of poor and indecisive decisions by state leadership. The need to have a 1-2 days meeting just to come out with some ‘slightly tweak’ SOPs becomes an annoyance, especially to the business owners, as it often puts them in limbo.

Yesterday, the state-wide announcement of MCO in Sarawak and the long-awaited release of SOP is another fiasco. While Sarawakians were painstakingly trying to make sense of the SOP, few hours after that, the Prime Minister of Malaysia announced a total lockdown for the whole nation. No ‘excluding Wilayah Sarawak’ was ever mentioned. Such uncoordinated announcements only show how much bureaucracy is at work.

Sarawakians were left hanging. Businesses can only pray that respective state agencies’ hotlines can get through during this long holiday. They are unsure if their businesses are listed under the ‘essential list’. No one seems to understand the detailed write-up of the SOP.

By now, SDMC should have a decision matrix that should enable them to make decisions promptly and decisively with reference to science. We are akin to having a war. Our enemy is not with humans but with viruses. Viruses don’t think like a human, it doesn’t take side nor holding back when they hit. During the war, we do not ask the enemy to ‘take a break’ for 24hrs so that we can hold a meeting to decide the next course of action. It seems like that is what SDMC is doing. Our decision needs to be swift; we need to be ahead of our enemy only then can we win the war.

The good thing is that viruses are not as intelligent as humans. They are predictable, and now we have more than enough science to back us up and be ahead of them. The question is, is SDMC heed science or letting bureaucracy getting too much in the way?

On May 22, SDMC said that over 95% of the 149 new cases of Covid-19 infection in Kuching that day due to Raya visits. Yet on May 4, SDMC was first to allow the first 7 days of Raya visitation. It was then shortened to 3 days, and subsequently to the 1st day of Raya on May 11. Despite many warnings from the health care professionals and science data pointing towards increasing of our daily infected numbers during the whole period from May 4 till May 11. How, in such a short span period, contradict to DATA available, SDMC can flip-flop on the RAYA visitation decision so many times?

The science DATA is irrefutable. People will not be able to ‘discipline’ themselves to stay at home or follow the SOPs during festive season visitation. The health care professionals are apparent in their voices that the best is not to have any festive visitation. If possible, for the whole year of 2021. Not even a day. It is just not worth it. Not at least until we can achieve the 80% population vaccinated target.

According to ‘Our World in DATA’, Malaysia’s COVID19 spread ability based on ‘Reproduction Rate’ (R) is one of the highest in the world, second only after Vietnam. While the ‘Reproduction Rate’ (R) is dependent on many other considerations, it is a good indication of the urgency that we are in to curb COVID19. Sarawak, just like our country Malaysia, new confirmed COVID-19 cases per million people, as of May 26, are the highest in the world.

During the nationwide Movement Control Order (MCO) from May 12 to June 7, SDMC decided not to follow. A decision only comes after a day later. Yesterday, Sarawak finally announced to be placed under MCO from May 29 to June 11. Yet, the announcement does not come with immediate details on the SOPs. Just like before, the waiting gap allows fake news, fake SOPs to spread across all social media, confusion ensue.

SDMC once again left no room for businesses to prepare beforehand. Such poor decision-making and management by the SDMC do not instil confidence in the people, only confusion. In Kuching, immediately after the announcement, we started to see people queuing up in shopping malls amidst the unknown outcome of the decision on MCO.

SDMC seems to have difficulty in comprehending the science DATA at hand. Instead of making a decisive “circuit breaker” (Full lockdown) to pre-empt escalating infections, SDMC instead chooses to use tightening stricter measures incrementally over the last few weeks via ‘enhanced SOPs’. Total disaster. It did not stop the numbers, and now we are reverting to the need of having MCO, needlessly prolong the suffering on the economy of our local businesses.

This is not the time to please the voters or to ‘win votes’ with our decision. We are supportive of Sarawak having the autonomy to make decisions and craft required SOP based on local context and needs.

Still, decisions must be based on science and data rather than any political considerations. Autonomy needs to be respected and handled with care. It is not a political tool to gain mileage. It is a double-edged sword that needs to be helm by solid and competent leadership; indecisiveness will only make it cut the other way.