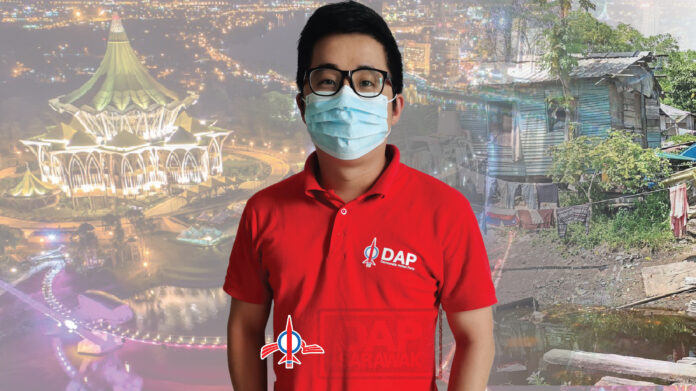 Bandar Kuching MP kelvin Yii personal assistant, Leslie Ting pointed out that Sarawak’s wealth no enjoyed by Sarawakians, is of the wrong doings of BN and Sarawak political leaders long term corruptions, especially since they value personal wealth rather than the benefits of Sarawakians.

Leslie Ting stated that, he is disgusted by the corruption in Sarawak, especially saddening to see such rich state being labelled as one of the poorest state in Malaysia. In his daily visits to Stakan, Samarahan, Kota Sentosa and Padawan, there are many modern residential, but also villages that have been in existence for decades, such as kampung, kampung Quop , Kampung Pangalan Kuap, Kampung Sri Arjuna and kampung Jawa.

He added, although these villages are closely located to cities, the infrastructure is devastatingly backward. Most roads are narrow and can only accommodate one car, some are still dirt roads and not even paved with stones.

As it is disheartening to know about the situation, Leslie Ting questions the BN and GPS members, where is the yearly allocation of RM5 million ?

He further said that Sarawak Chief Minister Abang Johari previously promised free electric connection worth up to RM5000. Therefore, why would people in places like Stakan, still face electricity connection issues due lacking money to connect those infrastructure, even when the main power line is beside the house. This is an scenario that’s falls on each Sarawakians, regardless of race.

In view of this, Leslie Ting urges The Chief Minister to follow up with the progress upon announcing the good news, so as to avoid the occurrence of things that have policies and countermeasures, but the people will not get practical benefits.

Leslie also disclosed that many places in the district will be flooded with continuous rain, causing serious property losses to residents. Therefore, relevant parties should actively expand and improve the drainage system to protect the people from flooding.