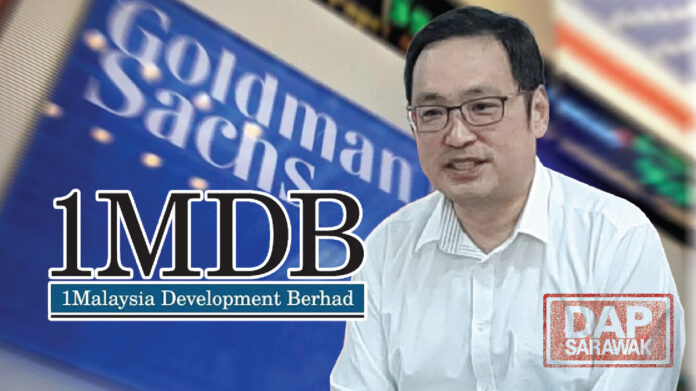 Goldman Sachs’s proposed US$3.9 billion (RM16.6 billion) settlement over the 1MDB scandal is another direct benefit to the people of Malaysia from a change of government after the 2018 General Elections.

Together with this proposal and the previous RM2.3 billion return of fund to Malaysia, there is so far a total of RM19 billion returned or to be returned to the country from the 1MDB scandal. This will not happen if there is no change of government in 2018.

During PH’s time, a total sum of US$7.5 billion was demanded by the PH government which is the loss of people of Malaysia due to the 1MDB scandal. That is approximately RM31 billion.

From this exorbitant amount of RM31 billion loss, all in, we only got back RM19 billion. There is still a shortfall of RM12 billion, loss to the people which will never be recovered. From Sarawak’s perspective, one important fact that we must take serious note is, Goldman Sachs was also the arranger for the offshore loans borrowed by the Sarawak State Government. It played the similar role in arranging for the issuance of multi-billion bonds for Sarawak Government.

Given Goldman Sachs’s track-record in 1MDB, the questions that all concerning Sarawakian must ask are: Was there any misappropriation of fund involved like that of the 1MDB bond?Was the proceeds of the bonds used properly and to the benefits of the people of Sarawak?

For now, under the GPS, all are presumed lawful and proper, just like the 1MDB case before the fall of the BN government in 2018. Is this the true facts of the matter? Only with a change of government of the State can one convincingly claim so.

This is the beauty of having a change of government, especially after an uninterrupted rule by the same parties for several decades. Though PH Government would have had much more positive results to show had it survived the “Sharaton Move”, but at least, with the 22-month PH government, amongst other things, we see the return of RM19 billion to the country.