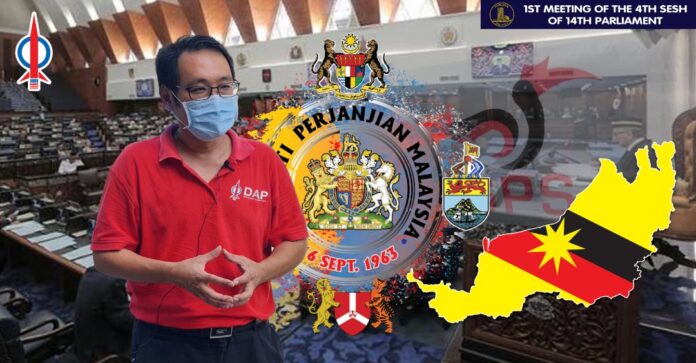 The GPS has failed Sarawakians the second time on proposed Amendment to Federal Constitution to restore Sarawak’s equal partner status in the Federation.

There is no reason for the Government to postpone the Amendment Bill to the Constitution to restore Sarawak and Sabah’s equal partner status in Malaysia.

During the meeting, he also mentioned that all the 3 Attorney-Generals of the Federal, Sarawak and Sabah Governments have agreed on the provisions.

Then came the shocking news that the Bill which was scheduled to be tabled in Parliament on 28 for second reading will be postponed to mid-December.

This is the second time that GPS has failed Sarawakians.

The first time GPS failed Sarawakians on this matter was on 10-4-2019 when the then Pakatan Harapan Government tabled the Amendment Bill and the GPS’ 18 Members of Parliament did not support the Bill, thus the Bill was defeated in failing to obtain the 2/3 rd majority (148 votes) to support the Bill.

Then, the 138 Members of Parliament voted in support of the Amendment Bill, 10 short of the required 148 number to pass the 2/3 rd majority support. All GPS’ 18 MPs abstained.

Now, with 115 MPs in the Government plus the 89 PH MPs already confirming our support for the Amendment Bill as presented by Wan Junaidi in the briefing on 12-10-2021, there is easily more than 2/3 rd of the MPs in support of the Bill.

Therefore, there is absolutely no reason for the postponement of the Bill to December, 2021.

Furthermore, in December, we have proposed a second amendment of the Bill to devolve power in education and healthcare to the State by listing the matters in the concurrent jurisdiction of both Federal and State specific to Sabah and Sarawak.

The postponement of the Bill by the current government shows that the GPS is not serious about the restoration of Sarawak’s status and the devolution of power in education and healthcare to the State.

GPS’ refusal to support the Bill on 10-4-2019 has delayed the restoration of Sarawak’s equal partner statue and the devolution of power by at least 2 and a half years. Now, with the postponement, more uncertainty and delay are caused.

This just goes to show that the GPS is not serious about the Constitution Amendment and merely uses it as a political propaganda tool, for the convenience of their election campaign.