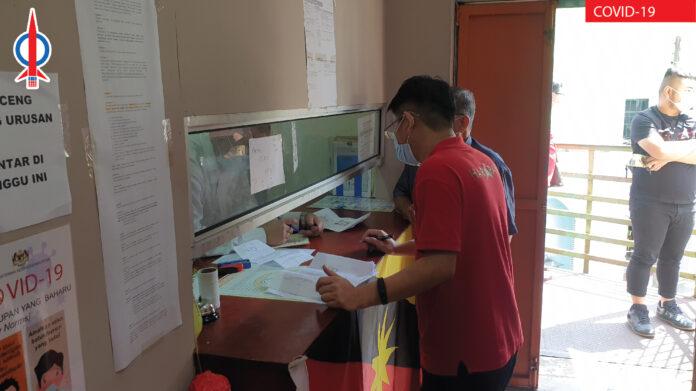 The latest increase of fines for non-compliance with the Standard Operating Procedures (SOP) is not only hard-handed and punitive in nature, but opens up many loopholes for abuse especially against the poor, uninformed and also uneducated.

It creates additional unnecessary burden to of health officers who are already over-stretch, over-worked and even under-appreciated.

Today, we have been receiving multiple complaints and been on the ground to help members of the public who seek help after claims of being unjustly fined up to RM 10k for allegedly breaking Covid-19 SOPs.

Many of these involves elderly, pensioners and the poor. In one of suchcases, it involves an elderly(~80 years old) who in thebpast week lost a son due to a preventable disease.

He is still in shock and grief due to the pasing of his beloved son. We were informed that he was sitting in coffee shop alone feeling lost and sad. He eventualy got up and walked out of the shop but forgot to wear his mask. He was then approached by enforcers who issued him a RM 10k fine straight.

He was very distraught as he cannot in any way afford to pay the fine. He acknowledged that he forgot but couldn’t think straight and do not feel like himself for quite a while due to all that is going around him.

While we strongly urge the public to follow all necessary SOP, but itnisnalso important for fair and equitable enforcement. Such not well-thought out policies open ups to risk of abuse.

Our concern of such high fine is how it opens risk for certain enforcers to “demand duit kopi” in exchange for not giving out the RM10k.

While this does not involve all the enforcement officers where many are responsible in what they do, but without proper accountability, “bad apples” among them can abuse this law and oppress those who are desperate, uneducated or even unaware.

Today itself we received few complaints from public how such “bad apples” allegedly demand some “kopi money” in exchange for them not to issue such summons.

That is why there must be a proper system of accountability to make sure that such law is not abused to oppress the people who are already struggling during this tough times.

On top of that, by pushing the responsibility to the Health Department to process such appeals, they are adding more work load, paper work and beauracracy to an already overstretched Health Department.

Now instead of purely focusing on the fight against Covid-19, the Health Department now has to deal with compounds issued by the police force.

They are already busy enough handling the Covid-19 crisis and they now have to suffer due to the inefficiency of the PN government.

Is this how we show our appreciation to our health workers?

At end of the day, policies that helps the compliance of SOPs are welcomed, but it must be educational in spirit, not punitive and more
importantly, hollistically address tbe issue without creatingunecessary burden to health front liners and the people.

That is why Parliament is so important where proper debates and policy discussions can take place in order for such gaps to be identified and addressed.

In order to fight Covid-19, we need a whole of society, “whole of government approach” to make sure that our people are not oppressed and victimised due to policies that are not properly thought through.