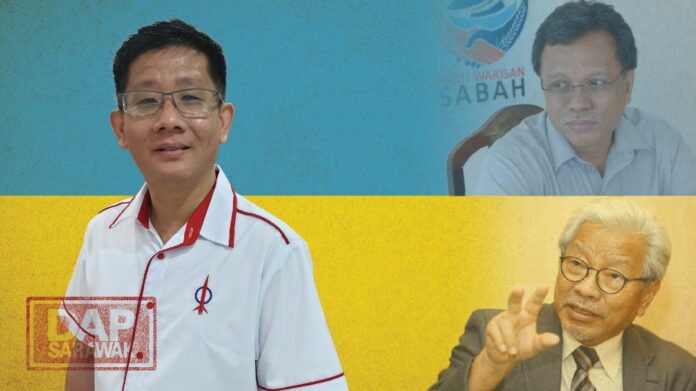 Sarawak Deputy Chief Minister Tan Sri James Jemut Masing recent statement that having Sabah Chief Minister Datuk Seri Shafie Apdal as the prime ministerial candidate is the “joke of the century” is uncalled for giving the fact that he is the only few leaders from east Malaysia within BN then dare to fight and voiced out against kleptocracy despite knowing that he will be stripped off his power and position for going against those ‘powerful’ leaders in Umno lead BN. A feat that none of the GPS leaders then in BN dare to do so, results of which deprived Sarawak of development and misused of fund into the billions which otherwise will greatly benefit Sarawakian especially in the rural area. Take for example, has GPS quickly forgotten the RM1.25 billion project that was intended to benefit 369 schools in Sarawak rural during their previous coalition of BN? GPS still owe it to the people an explanation.

Under Malaysia constitution, any Malaysians that meet the criterial regardless of race, religion or where he comes from can be a candidate as Prime Minister. GPS leaders should be supportive of the move hence we east Malaysians have demonstrated our ability to build a cohesive society, vital elements in building a stronger, more resilient, and productive Nation.

As a Chief Minister of Sabah, Datuk Seri Shafie Apdal also wasted no time in rejecting PAS extreme view, standing firm in protecting the right of non-Muslim to consume alcohol, especially the culture of the indigenous people in the state. GPS should instead reject those religious bigots of PAS which wasted no time since the forming of PN government expressed their extreme view, thereby undermining our multi-racial and multi-religious social structure. Malaysians have consistently rejected PAS with power at the federal level, for the same reason. GPS has betrayed Sarawak by putting pas in federal power thereby jeopardising the secularism of Sarawak and Malaysia.

What the people of Malaysia want is politicians with integrity and principles to safeguard and protect the Rakyat’s tax-payer money. With the support of GPS, the old corrupt regime once again back in power which have failed to demonstrate even the slightest remorse for their long years of misrule, for the billions that were lost to corruption, for clamping down on civil liberties and for undermining our national institutions.

State Government Urge To Step One Step Ahead Of COVID-19 Pandemic, Makes Face Masks Mandatory And Disclosing Of Important Information To Curb ‘The...

Rakyat Voted For Change And Not Self-Serving Politician

Many Recipient Yet To Receive BKSS

Violet Yong Wui Wui DAP Sarawak - 07/08/2020
Press Statement By Violet Yong: I call on the Sarawak Government to be more systematic in handling the Kenyalang...

Irene Chang DAP Sarawak - 04/08/2020
Why is the Sarawak Government only expecting a payment of RM2 billion in the State Sales Tax from Petronas after Petronas has...

Chong Chieng Jen DAP Sarawak - 05/08/2020
Press Statement By Chong Chieng Jen: The Ministry of Domestic Trade and consumer Affair has confirmed that it will...