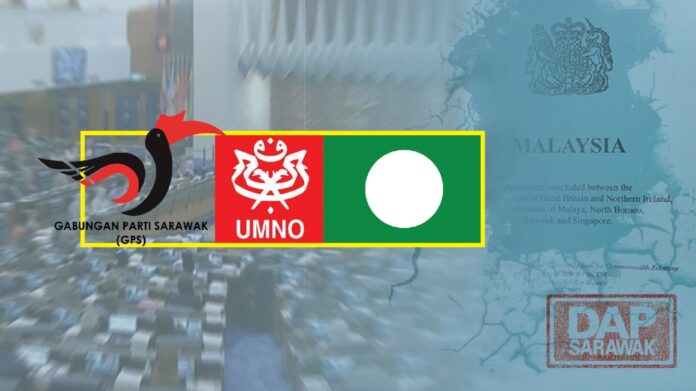 The Pakatan Harapan’s effort to restore Sarawak and Sabah to their rightful status was defeated by GPS working together with UMNO and PAS.

I wish to remind Idris Buang that when PH was in Government, we tabled the Constitution Amendment on Article 1(2) of the Federal Constitution restoring the status of Sarawak and Sabah to the MA63 position, ie. 2 of the 3 regions in Malaysia instead of the present one of the 13 states status.

However, the Constitution Amendment could not get the 2/3 rd majority support in Parliament because GPS ganged up with PAS and UMNO to defeat the Amendment Bill in Parliament.

What the BN Government have eroded the rights of Sabah and Sarawak over the past 55 years, we managed to restored more than 3 quarters thereof in less than 2 years.

However, regrettably, PH Government fell and now we are back to square one with the disbandment of the Cabinet Committee and formation of another Committee by the PN government.

On the promise of 20% Oil and Gas Royalties and 50% tax collection in Sarawak, it was the GPS State Government who rejected the Pakatan Harapan Sarawak’s proposal that the same be used for education and healthcare purposes. If the GPS accepts the proposal, not only would we have the 20% Oil and Gas Royalties and 50% tax collection, Sarawak would now have its autonomy in Education and Healthcare.

Either Idris Buang is too new in politics or he has selective memory that he has forgotten that it was the BN Government’s rule in the past 55 years that Sarawak has lost its rights, its special status in Malaysia and even the rights over oil and gas in Sarawak.