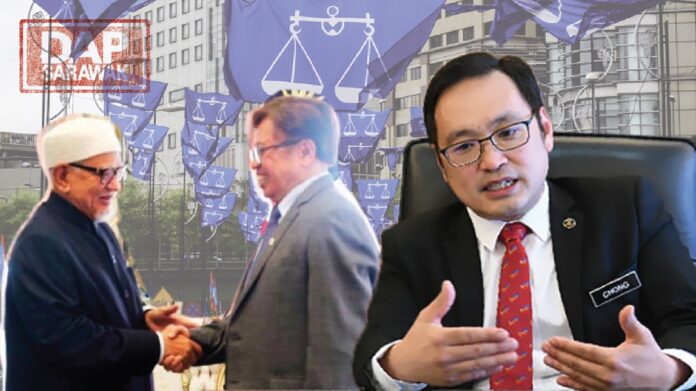 The cat is finally out of the bag. But it should come as no surprise that the GPS is now in a formal coalition with UMNO and PAS. In fact, the moment they joined the Perikatan Nasional cabinet to form the backdoor government, they were already in one coalition.

Yet, this was GPS’ initial justification for forming the Government together with PAS and UMNO.

It is foolishly naive and ridiculous to think that the UMNO PAS led federal government will do good to Sarawak. No amount of allocations, even if there is any additional allocations, can compensate for the destruction that such a combination will do to the fundamental social structure and system of the country.

The scandalous corrupt practices of UMNO can be epitomized in the 1MDB case and the famous “RM 2 million is just my pocket money” statement in Court. The discharge of Riza Aziz from his charges in court is another indication of the return of the kleptocratic regime.

We will see more of such incidents unfolding themselves in the near future as those involved in corruption charges will one by one be discharges on agreements that they return part of their loots to the Government.

To put it in simple terms, the Riza Aziz case set the clear precedent that one can steal RM100 and if he is caught, he can get scot free by returning RM50. If he is not caught, he gets to enjoy the whole of the RM100 stolen money.

What the GPS has done now by supporting the UMNO PAS government is not only putting the corrupt regime back in power but at the same time the GPS is putting the religious bigots of PAS in power who is definitely a threat to the secularism of our Federal Constitution and also that of Sarawak’s social structure.

There is no way that GPS can shield Sarawak from the policies and laws implemented by the Federal Government. Take for examples, our children’s education, the healthcare system, financial system, business ecosystem, all of these are part and parcel of our everyday lives and they will all be subject to inputs from PAS ministers and their ideology in the cabinet.

In 1976, the GPS, under their previous coalition of BN, has compromised Sarawak’s rights in respect of our natural oil and gas resources. This time, the GPS has done even greater injustice to Sarawakians by putting PAS in Federal Government thereby undermining our multi-racial and multi-religious social structure.