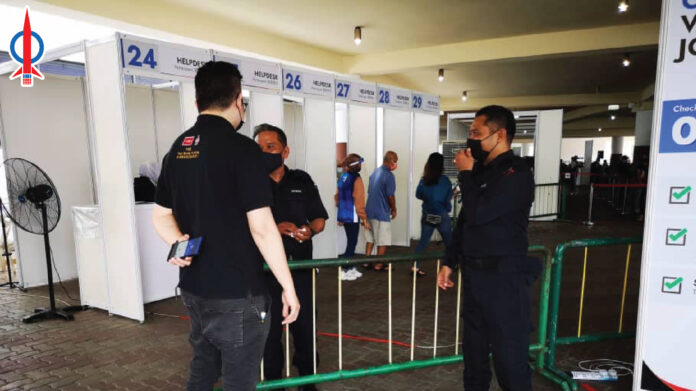 This morning we were on the ground at Stadium Perpaduan to monitor and better understand the situation as well as to give our feedback to the volunteers and authorities in the area.

We spoke to the police, RELA, and even MYVAc leaders to hear their feedbacks on the issues they face on ground. They are just there to carry out their duty and any improvements must be done on a policy level by government to make things smoother on the ground.

So this were my suggestions to those on ground, and will alert the Minister-in-charge on policy suggestions:

(1) Long-term, we need to decentralise more PPVs. The Gov is looking at opening another one at BCCK and also involve some of the private hospitals and clinics, but i believe more can be done.

More middle/ small scale PPVs can be open in each constituency( open basketball court, balai raya..etc) to reduce congestion. This should be the focus rather than large scale PPVs.

This will hopefully encourage people and remind them to turn up based on their set appointment time.

With that said i encourage the public to:
(1) Check and update their MySejahtera details. Some of delays due to issues of MySejahtera not being updated.
(2) Turn up according to your appointment time. Come 30 mins before to avoid unacesary congestion.
(3) Eat something and use the toilet before coming if possible. The wait is long and the portable toilets are not most user-friendly.
(4) Please always follow SOP and maintain physical distancing even when queuing up, even if you are accompanying your elderly.

We all play our part to protect one another.