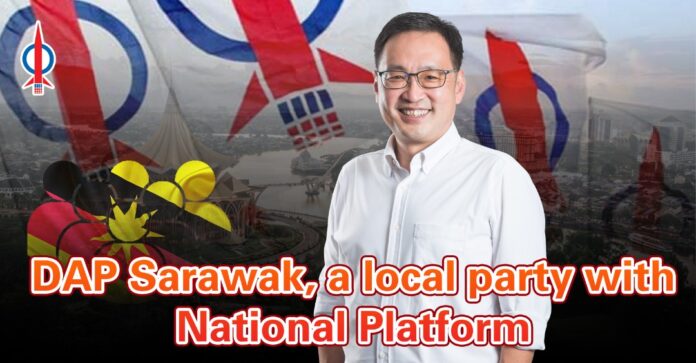 The DAP Sarawak’s autonomy within the party DAP is manifest in that:

As part of a national party, DAP Sarawak is also able to bring the local Sarawak issues into the limelight and their rightful places in national politics.

In fact, the notion about Sarawak’s equal partnership and special position and rights within Malaysia first gained national attention in year 2012 when the then Pakatan Rakyat national leaders endorsed the Kuching Declaration in Kuching on 16.9.2012.

Up till then, no local political party, not even the then governing Sarawak Barisan Nasional Government, was able to make 16 th September an important date nationally.

In 2014, DAP Sarawak launched the Bintulu Declaration on the demand for devolution of power and State autonomy in healthcare and education. That started the talk of Sarawak autonomy at the Federal level.

Therefore, regardless how strong a local party is, without the national backing and platform, it can never influence national politics. DAP has been and must continue to be the vehicle to push Sarawak issues to national level. This will ensure that federal policies are made with the full appreciation of the unique Sarawak elements.

We have gone through 50 years of history where DAP did not have a strong presence in Sarawak.

That was also the time when the rights of Sarawak were eroded most. During those days, at certain point in time, there was also strong local opposition parties, the heydays of SNAP and PBDS, but these local-based parties could not make any impact on national politics. Worse still, they could not even withstand the test of time.